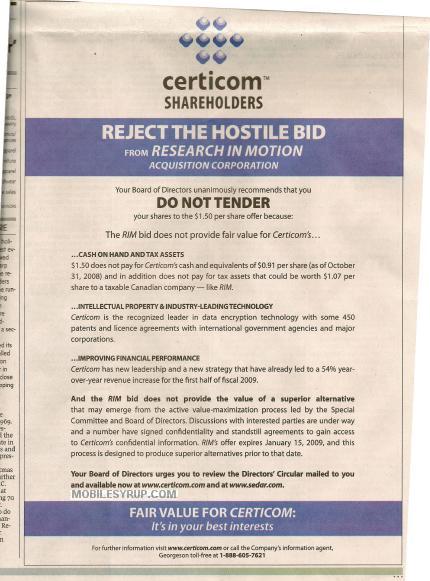 Mississauga, Ont.-based Certicom is a security software firm that was founded in 1985. They have clients such as Motorola and IBM for its popular Elliptic Curve Cryptography (ECC). On December 22nd the Certicom Board of Directors  urged shareholders to reject the $1.50 per share offer (or $66 million) as it undervalues the company. Certicom requested the Ontario Superior Court of Justice to block RIM from making a bid (a hearing is scheduled January 9, 2009). In addition, Certicom states RIM has violated confidentiality agreements. and has contacted the Ontario Securities Commission for a cease trade order.

Now, most likely a standard practice when a hostile bid occurs, Certicom has put an ad in the paper as a reminder to their shareholders to “REJECT THE HOSTILE BID”