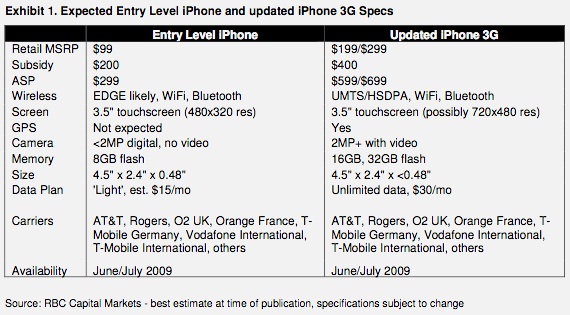 Have you been holding out for a more cost effective iPhone?

Good news from the rumour mill as Mike Abramsky at RBC Capital Markets has gone on record to say that Apple will most likely release a $99 iPhone this June or July… along with a revised set of data plans to meet the entry level pricing.

In his 7-page report he did not give any insight into his sources but also stated that the iPhone 3G will get a “performance upgrade”. In regards to the nuts and bolts of the possible $99 iPhone, Abramsky said will be similar to the current design with the same screen size, lower resolution around 480×320. In addition, there will be no 3G, no GPS, and only a 2-megapixel camera… with no video.

Tim Cook, Apple CEO, said a few weeks ago about the iPhone Nano rumour: “You know us, we’re not going to play in the low-end voice phone business. That’s not who we are. That’s not why we’re here. We’ll let somebody do that, our goal is not to be the unit share leader in the phone industry. It is to build the best phone.”

Only time will tell…