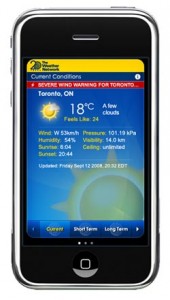 The CRTC has been involved in new media hearings for the past week and is looking into re-examining the regulations when it comes to Internet traffic management.

The reason this is coming up now is because back in 1999 the CRTC decided not include “new media” as part of the regulation. Dr. Michael Geist, professor at the University of Ottawa, said it’s for 3 main reasons:
1. Licensing and regulation would not help the development of New Media.
2. A lack of regulation of new media would not impede the ability of other media forms from fulfilling their duties
3. The Commission felt that New Media needed more time to become competitive.

Many organizations have stepped up to the plate to have their say: GlassBOX Television, Friends of Canadian Broadcasting, ACTRA, SOCAN and majority of the conversations have been based around regulating the internet on your computer.

However, this changed yesterday when Pelmorex, which owns The Weather Network and MétéoMédia, made claims that the wireless carriers need to have a “transparent set of traffic management rules” when it comes to monitoring Internet traffic on our mobile devices.

From their submission to the CRTC Pelmorex stated:
“Pelmorex is concerned that the Commission might adopt a definition of “net neutrality” or “traffic management” that will be too narrow and will not fully address all of the instances where a network operator might manipulate traffic to its benefit. While not currently a concern for wire-line ISPs, there are a number of commercial or business practices that are being employed by wireless network operators that limit access to their networks. Wireless networks are increasingly becoming a key access point for the Internet and the devices that are used to access that network are today’s most ubiquitous computers. These wireless networks, which are owned and operated by the same companies that dominate the wire-line market, provide customers with the ability to send and receive a variety of traffic, including voice, data and programming.”

In addition, Pelmorex wrote “We believe that the measures employed by wireless carriers to control access to their networks should be considered as a critical part of this proceeding and that the  Commission should take steps to ensure that all network operators, including wireless  carriers, are subject to the same general requirements relating to net neutrality.”

Pelmorex goes into greater detail regarding Rogers, Bell and TELUS and how the CRTC should put regulations on mobile devices in action as soon as possible: “The reason for this is that the mobile devices and networks employed by wireless carriers are quickly evolving to the point where the quality of Internet access service provided through a mobile device will be equivalent to the service provided by wire-line ISPs. Recently introduced mobile devices, like the Rogers Stick, provide high speed wireless connections that are comparable wire-line ISPs. Telus and Bell have also recently announced that they will be moving towards a 4G GSM network by 2010. With high-speed downlink packet access (HSDPA), the wireless network will enable customers to download content at a speed of 14 megabytes per second. This means that wireless Internet for Bell and Telus will be faster than their landline connections, which will accelerate the increasing usage trends for mobile Internet1. Wireless and wire-line ISPs should, therefore, have comparable regulatory regimes.”

Pelmorex takes one for the team with this comment: “Wireless carriers frequently establish “walled gardens” or “malls” at their sole discretion so as to differentiate Internet content. Consumers are then charged more to access content or websites that the carrier, in its sole discretion, excludes from its walled garden or mall.” and “Wireless carriers routinely impose restrictions on the ability of content providers (typically mobile websites) to deliver advertising or restrict or charge more if a customer accesses that advertising, effectively undermining the business case for a mobile website”.

With all this said, I’m sure more organizations will speak up simply because our mobile internet traffic has significantly increased over the past year. Rules and regulations are most likely inevitable… but we can have our say as nobody wants to be limited, watched or have their internet activity monitored.

“Net Neutrality in Canada is the principle that consumers should be in control of what content, services and applications they use on the public Internet.” (from Neutrality.ca)

“When I invented the Web, I didn’t have to ask anyone’s permission. Now, hundreds of millions of people are using it freely. I am worried that that is going end” – Sir Tim Berners Lee

If you want to read the full 11-page submission by Pelmorex you can get it here (PDF). More updates soon.