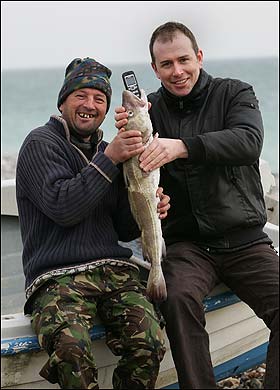 This is one of those stories that you would hear about on Ripley’s Believe it Or Not episodes.

Apparently a UK resident Andrew Cheatle lost his Nokia 1600 cellphone at sea… only to be contacted a week later by fisherman Glen Kerley who found it still working in the belly of a 25 pound cod!

Cheatle said: “I was messing about with my dog and my phone must have fallen out and been swept out in the swell. I kept calling it but I gave up hope after a couple of days”. Then his girlfriends cell started ringing with his number “She said some guy was going on about my phone and a cod so she handed it over to me and he told me where he had found it. I thought he was winding me up but he assured me he had caught a cod that morning and was gutting it for his fish stall and that my Nokia was inside it — a bit worse for wear. I didn’t believe him but went to meet him and found it was my phone — a bit smelly and battered — but incredibly it still worked after I let it dry out.”

The quote of the day comes from fisherman Kerley “Cod are greedy fish — they’ll eat anything. They have big heads and big mouths. I’ve found plastic cups, stones, teaspoons, batteries and I’ve also heard of someone finding false teeth in one. I know what it’s like to lose your phone. It can be really frustrating. So I thought I may as well make a few calls to see if I could get it back to him. It was a bit smelly but I was glad to return it.”

I never new a Nokia 1600 had such a long battery life and can take a beating!