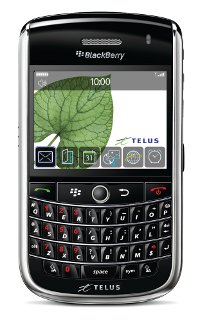 We’ve been playing around with the TELUS BlackBerry Tour for a few days now and must admit that it’s a great addition to their lineup… a much need style change from the old Curves. This was just officially launched and can be your for a promo price of $229.99.

The overall design looks like a Bold, feels like a Curve 8900 but clearly a Tour 9630. The chrome outline looks great and rest assured like all BlackBerry devices it is probably the most reliable when it comes to your e-mails. This can also do your IM (Yahoo! Messenger, Google Talk and BlackBerry Messenger), plus your text messages with a maximum 140 character limit.

The Tour has a full QWERTY keyboard and only weighs 130 grams and comes with 256 MG of RAM so if you’re the type that runs a lot of programs this will be great for your because you won’t feel any slowdowns. The display is another great addition, an HGVA display with a resolution of 480×360. This shows everything so clear, especially the pics from the camera.

Speaking of, the 3.2 megapixel camera has auto-focus, geo-tagging, image stabilization and can take videos. We captured a few and found the quality to me really clear. Taking pics in different lighting was a bit of an issue but nothing really to cry about. Also the quality of video was impressive. Even with the windy day that we took the video for it produced a high quality output. The sound and images were clear. A nice feature is the ability to upload these pics straight to your Facebook account.

The speakers are impressive and are located on the left hand side of the device. We had them at full blast when we cranked out the music. The Tour can hold up to 16GB of memory with a microSD card (located under the back panel). So you’ll probably only need this to carry around with you. On the right hand you’ll see a 3.5 mm headset jack, plus a micro USB to charge it up.

Surfing the web was a pleasant experience. Loads fast and renders web pages well. The only downside is that is doesn’t have WiFi, something that would’ve been good to include.

Here’s Part 2 of our review, we will follow up with a 3rd for the battery life and AppWorld shortly: