Microsoft has ditched Windows Mobile for the new and very different Windows Phone 7 Series. Everything looks incredibly fresh and brought up to date – completely integrating Xbox Live and Zune with an redesigned user interface. Gone is the “Start” screen and you can now say hello to something called “tiles”… basically quick access to your e-mail, contacts, calendar, photos, events etc…

Microsoft’s CEO Steve Ballmer stated “Today, I’m proud to introduce Windows Phone 7 Series, the next generation of Windows Phones. In a crowded market filled with phones that look the same and do the same things, I challenged the team to deliver a different kind of mobile experience. Windows Phone 7 Series marks a turning point toward phones that truly reflect the speed of people’s lives and their need to connect to other people and all kinds of seamless experiences.”

The full press release is below but unfortunately there is no good news for us Canadians. We are completely left off the list of the upcoming launch carriers this 2010 holiday season. You can expects these carriers though and most likely unlock the device and get it working on Canadian soil: AT&T, Deutsche Telekom AG, Orange, SFR, Sprint, Telecom Italia, Telefónica, Telstra, T-Mobile USA, Verizon Wireless and Vodafone. 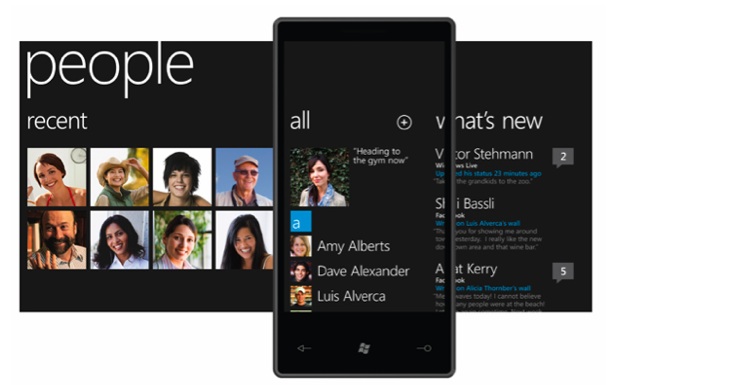 Here’s the Press release:
BARCELONA, Spain — Feb. 15, 2010 — Today at Mobile World Congress 2010, Microsoft Corp. CEO Steve Ballmer unveiled the next generation of Windows® Phones, Windows Phone 7 Series. With this new platform, Microsoft offers a fresh approach to phone software, distinguished by smart design and truly integrated experiences that bring to the surface the content people care about from the Web and applications. For the first time ever, Microsoft will bring together Xbox LIVE games and the Zune music and video experience on a mobile phone, exclusively on Windows Phone 7 Series. Partners have already started building phones; customers will be able to purchase the first phones in stores by holiday 2010.

“Today, I’m proud to introduce Windows Phone 7 Series, the next generation of Windows Phones,” said Steve Ballmer, chief executive officer at Microsoft. “In a crowded market filled with phones that look the same and do the same things, I challenged the team to deliver a different kind of mobile experience. Windows Phone 7 Series marks a turning point toward phones that truly reflect the speed of people’s lives and their need to connect to other people and all kinds of seamless experiences.”

Designed for Life in Motion

With Windows Phone 7 Series, Microsoft takes a fundamentally different approach to phone software. Smart design begins with a new, holistic design system that informs every aspect of the phone, from its visually appealing layout and motion to its function and hardware integration. On the Start screen, dynamically updated “live tiles” show users real-time content directly, breaking the mold of static icons that serve as an intermediate step on the way to an application. Create a tile of a friend, and the user gains a readable, up-to-date view of a friend’s latest pictures and posts, just by glancing at Start.

Every Windows Phone 7 Series phone will come with a dedicated hardware button for Bing, providing one-click access to search from anywhere on the phone, while a special implementation of Bing search provides intent-specific results, delivering the most relevant Web or local results, depending on the type of query.

People. This hub delivers an engaging social experience by bringing together relevant content based on the person, including his or her live feeds from social networks and photos. It also provides a central place from which to post updates to Facebook and Windows Live in one step.
•

Pictures. This hub makes it easy to share pictures and video to a social network in one step. Windows Phone 7 Series also brings together a user’s photos by integrating with the Web and PC, making the phone the ideal place to view a person’s entire picture and video collection.
•

Games. This hub delivers the first and only official Xbox LIVE experience on a phone, including Xbox LIVE games, Spotlight feed and the ability to see a gamer’s avatar, Achievements and gamer profile. With more than 23 million active members around the world, Xbox LIVE unlocks a world of friends, games and entertainment on Xbox 360, and now also on Windows Phone 7 Series.
•

Music + Video. This hub creates an incredible media experience that brings the best of Zune, including content from a user’s PC, online music services and even a built-in FM radio into one simple place that is all about music and video. Users can turn their media experience into a social one with Zune Social on a PC and share their media recommendations with like-minded music lovers. The playback experience is rich and easy to navigate, and immerses the listener in the content.
•

Marketplace. This hub allows the user to easily discover and load the phone with certified applications and games.
•

Office. This hub brings the familiar experience of the world’s leading productivity software to the Windows Phone. With access to Office, OneNote and SharePoint Workspace all in one place, users can easily read, edit and share documents. With the additional power of Outlook Mobile, users stay productive and up to date while on the go.

Partners from around the world have committed to include Windows Phone 7 Series in their portfolio plans. They include mobile operators AT&T, Deutsche Telekom AG, Orange, SFR, Sprint, Telecom Italia, Telefónica, Telstra, T-Mobile USA, Verizon Wireless and Vodafone, and manufacturers Dell, Garmin-Asus, HTC Corp., HP, LG, Samsung, Sony Ericsson, Toshiba and Qualcomm Inc. The first phones will be available by holiday 2010. Customers who would like to receive additional information about Windows Phone 7 Series and be notified when it is available can register at http://www.windowsphone7series.com.