Rogers “Who has the Touch” contest could score you $5,000 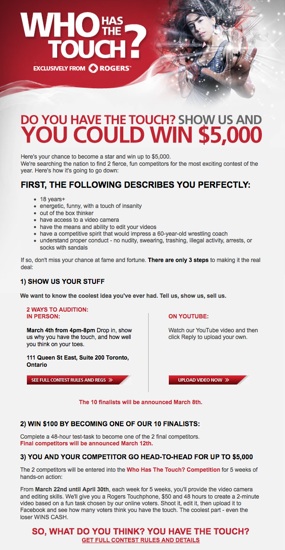 Rogers is holding a contest called “Who Has The Touch?” and basically it’s a competition between you and the rest of Canada to see who has the best “touch”. According to the contest rules all you have to do is tell Rogers “the coolest idea you’ve ever had”. To enter all you have to do is upload a video to YouTube and eventually compete against 1 other person to win $5,000.

If you are chosen as one of the two finalist you’ll then endure a 5-week of hands-on competition called “Who has the Touch Weekly Challenges”. This will go from March 15th to April 30th and Rogers states that “we’ll give you a Rogers Touchphone, $50 and 48 hours to create a 2-minute video based on a fun task chosen by our online voters. Shoot it, edit it, then upload it to Facebook and see how many voters think you have the touch”.

It’s all based on who gets the most votes in the end of the 5-weeks, so get all your friends together.
Check out the contest here at Facebook