80% of Canadian web browsing activity is from an iPhone 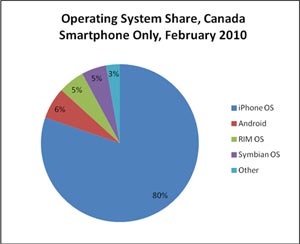 The Apple iPhone was released back in Canada on July 11th, 2008 and now majority of the carriers offer the popular smartphone. There’re no official numbers of how many iPhones have actually been sold since the Canadian launch, would be great to see a combined total with all sales of Rogers, Fido, Bell, TELUS and Virgin numbers.

However, more statistics have come out by mobile ad network AdMob .They’ve reported in their February metrics that the iPhone OS accounted for 80% of all web browsing activity from smartphones in Canada. Following the iPhone is Google’s Android platform at 6%, RIM’s BlackBerry with followed at 5% and Nokia, Palm and Windows Mobile accounted for the rest (9%).