Report: 89% of Canadians use their mobile phones to make calls 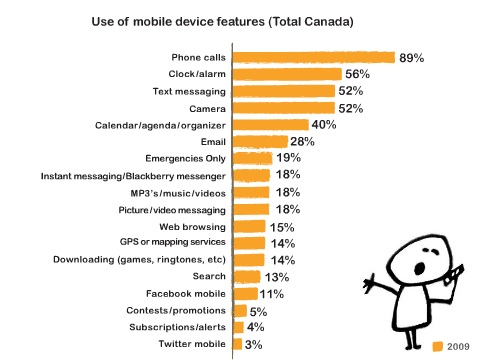 A report created by Delvinia called the “Managing The Hype – The Reality of Mobile in Canada” shows how us Canadians actually use our mobile device. The report goes into detail in several categories such as Smartphone ownership, GPS awareness and usage, mobile applications, mobile cameras and mobile games.

They state that the number of Canadians who own a mobile device has never been higher. 99% of the Net Generation (NGen) aged 18 to 34 have a mobile device. In addition, 87% of Canadians aged 65+ have a mobile device. Even with these high numbers Delvinia states that most Canadians “don’t appear to be using the more advanced features that mobile providers tout and marketers dream of fully leveraging. In fact, Canadian mobile device users seem to be most comfortable with the basic features that have existed on phones for years such as sending and receiving text messages, using the clock/alarm feature, and taking photos.”

The report states that Canadians surprisingly use their mobile phone to make calls the most at 89% (curious why it’s not 100%), followed by using the clock/alarm at 56% and text messaging comes in a 56%… e-mail comes in at a low 28%.

Check out the complete report here:

Vol1: Managing The Hype – The Reality of Mobile in Canada
View more documents from Delvinia Interactive.