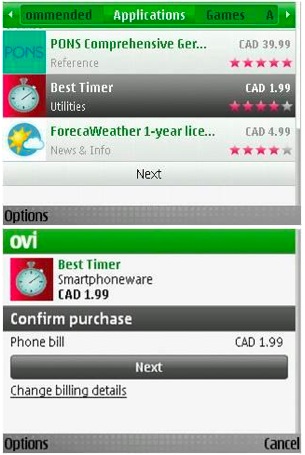 Nokia’s Ovi Store launched late 2009 and has free and paid apps available for download. One of our readers pointed out that carrier billing is now available… you’ll see on the screenshot from his Nokia E71 it gave an option to charge the paid app to your phone bill. Apparently this only started as an option this week.

We reached out to Nokia and they stated that “Credit card billing is available for people who want to purchase apps. Currently we aren’t discussing future plans with regard to billing.”

Anyone else having the opportunity to bill to your carrier?