There is no doubt that the upcoming Sony Ericsson Xperia Play is one of the most anticipated Android devices that will be launched this year. This is the PlayStation phone that has been heavily leaked online for months but today it was officially announced. Specs have it coming with Android OS 2.3 (Gingerbread), a 1GHz Snapdragon processor, 4-inch display (resolution of 480×854), slide-out Sony PSP gaming controls, 5 megapixel camera with LED flash, a front facing camera, 3.5mm headphone jack, micro USB port and a 1,500mAh battery.

Good news for us Canadians as we’ve been tipped that this will be officially launching Spring 2011. As you can also see by the internal screenshot by one of our tipsters shows the Sony Ericsson arc will be release during the same time. No word yet on price points but certainly exciting.

Update: Looks like this is now official. Rogers has issued a press release stating that “Pricing will be announced at launch” and that “the Sony Ericsson Xperia™ PLAY, the world’s first PlayStation Certified smartphone, and the Xperia™ arc smartphone, which will debut in Canada exclusively at Rogers™. The Xperia™ PLAY and Xperia™ arc are expected to be available in Canada in Spring 2011”. 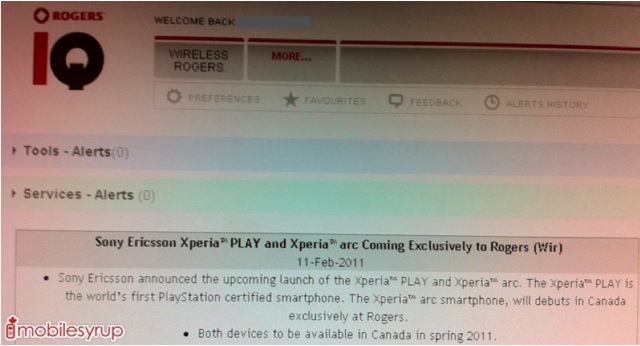 This steps up Rogers lineup in a huge way. More soon…
(Thanks tipster!)