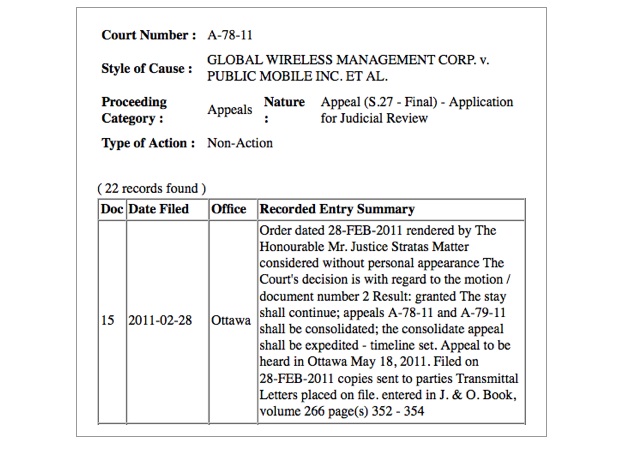 Good news for Globalive’s Wind Mobile. A court document today shows their “stay of judgment” has been granted an extension until May 18th. On February 4th Federal Court Justice Hughes stated the 2009 decision that let them operate in Canada “was based on errors of law and must be quashed”. Hughes gave Globalive a 45-day “stay of judgment” where they were able to appeal but still operate their wireless service.

This case was brought on by Public Mobile because they believed the Globalive (Wind Mobile) ownership structure didn’t follow Canadian foreign ownership laws but also wanted the same treatment (see this link here). Anthony Lacavera, Chairman of Globalive stated in a release when they appealed the decision that “Like the Government, we disagree with several aspects of the Federal Court decision, and we are confident that the Federal Court of Appeal will overturn it. Our biggest priority is to put this regulatory gaming by our competitors behind us, so that we can continue to focus on bringing wireless innovation and competition to the marketplace”.

Here’s the official court document stating the extension to May 18th:
“Order dated 28-FEB-2011 rendered by The Honourable Mr. Justice Stratas Matter considered without personal appearance The Court’s decision is with regard to the motion / document number 2 Result: granted The stay shall continue; appeals A-78-11 and A-79-11 shall be consolidated; the consolidate appeal shall be expedited – timeline set. Appeal to be heard in Ottawa May 18, 2011.”