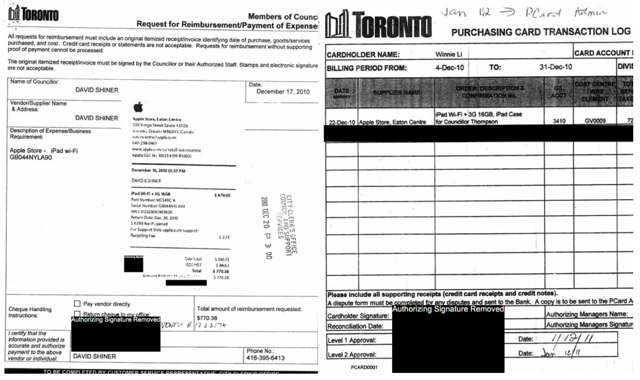 There are some Government officials who are part of a }pilot project” and living the dream by writing off their Apple iPad . Other Government officials are being told they cannot have the Apple tablet because “The House system is totally based on Microsoft”. Well it now seems a couple Toronto City Councillors have added their names to the growing list who are hopping on the iPad bus and having us taxpayers flip the bill.

City Councillors Michael Thompson scored himself a 32 GB iPad Wifi+3G model (and a case) and David Shiner now has a 16 GB Wifi+3G iPad with a case too. Both were purchased right around the holiday season, December 16th for Shiner and December 22nd for Thompson. No word on what they are using the iPads for but hopefully it’s for moving the city forward in some way.

Check out the expense reports here at the City of Toronto 1, 2, 3
Via: iPadInCanada