Details leak of Nexus tablet: quad-core Tegra 3 for under $200, launching at Google I/O, on sale in July 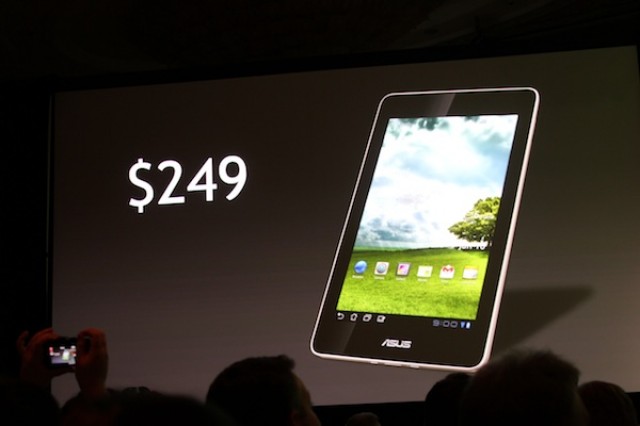 Some interesting rumours of the Nexus tablet have come to light after TechnoBuffalo received word from a trusted source that the slate will launch during Google I/O next month. The information seems to confirm that the tablet will be manufactured by Asus and will sport a quad-core Tegra 3 chip and a 7-inch screen of unknown resolution.

As we’ve said before, this will be the first time a quad-core tablet will be available for under $300, and if Google can manage to outfit the hardware with a comparably good software package, it will likely sell quite well. The rumour extends to the tablet running Android 5.0 Jellybean, though we are sceptical of that happening. Ice Cream Sandwich is running on fewer than 5% of the total Android population, and it would make more sense to launch the device with a stock “Nexus” build of Android 4.0.4, showing off what Google’s latest OS can do on inexpensive hardware. Sure, there might be some new features added to the mix, maybe even a bump to 4.0.5, but it’s unlikely that Jellybean will be launched only eight months after its predecessor.

In all likelihood, the Nexus tablet will be largely based on Asus’ launched-but-buried MeMo 370t, which debuted at CES with the same rumoured specs but a price point of $249. Since then Google has managed to secure enough component inventory at a good price to bring down the cost to $199. The launch will also confirm Nvidia’s commitment to bringing sub-$200 Tegra 3 tablets to market using an updated manufacturing process and cheaper DDR3 RAM.

Other rumours for Google I/O include an announcement of multiple Nexus smartphone manufacturing partners including Motorola, LG, Sony, Samsung and HTC.

At this point the only concrete things we know are that Nvidia is bringing cheap Tegra 3 tablets to market, likely with the help of Google and Asus. We’d love to see Jellybean but are not going to hold our breath. In the meantime, let us know: would you buy a stock ICS version of an Android tablet if it was under $200?