Azio Retro Classic Keyboard is a gorgeous piece of hardware, even if it’s not incredibly useful

This steampunk inspired keyboard is perfect for fans of the genre

As I sit here at my desk typing away at this story, I’m forced to come to terms with a simple fact of the universe: Azio’s Retro Classic keyboard is not for me.

Make no mistake, I’ve been enamoured with the copper and leather keyboard’s overall steampunk aesthetic since the moment I laid eyes on it. However, every time my soft, mushy human fingers are forced to interact with the keyboard’s uncomfortable, hard keys, I’m immediately put off by how subjectively uncomfortable the whole typing experience has turned out to be. 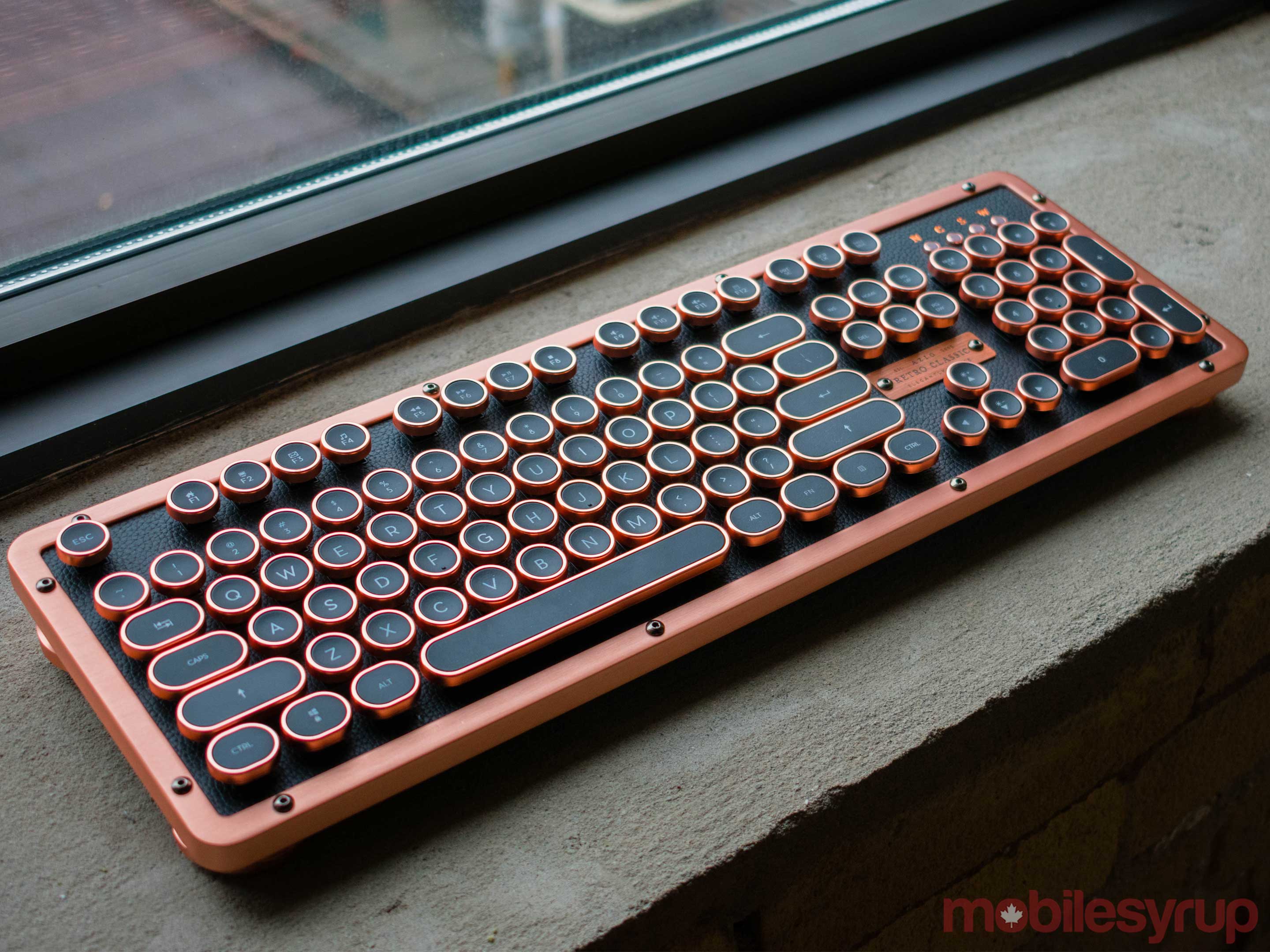 Ignoring steampunk sensibilities, the Azio Retro Classic is very clearly meant to appeal to those users who have forever been unable to let go of the classic typewriters of the past in favour of something more modern. The resemblance to an actual typewriter ends at the keyboard’s visual aesthetic. 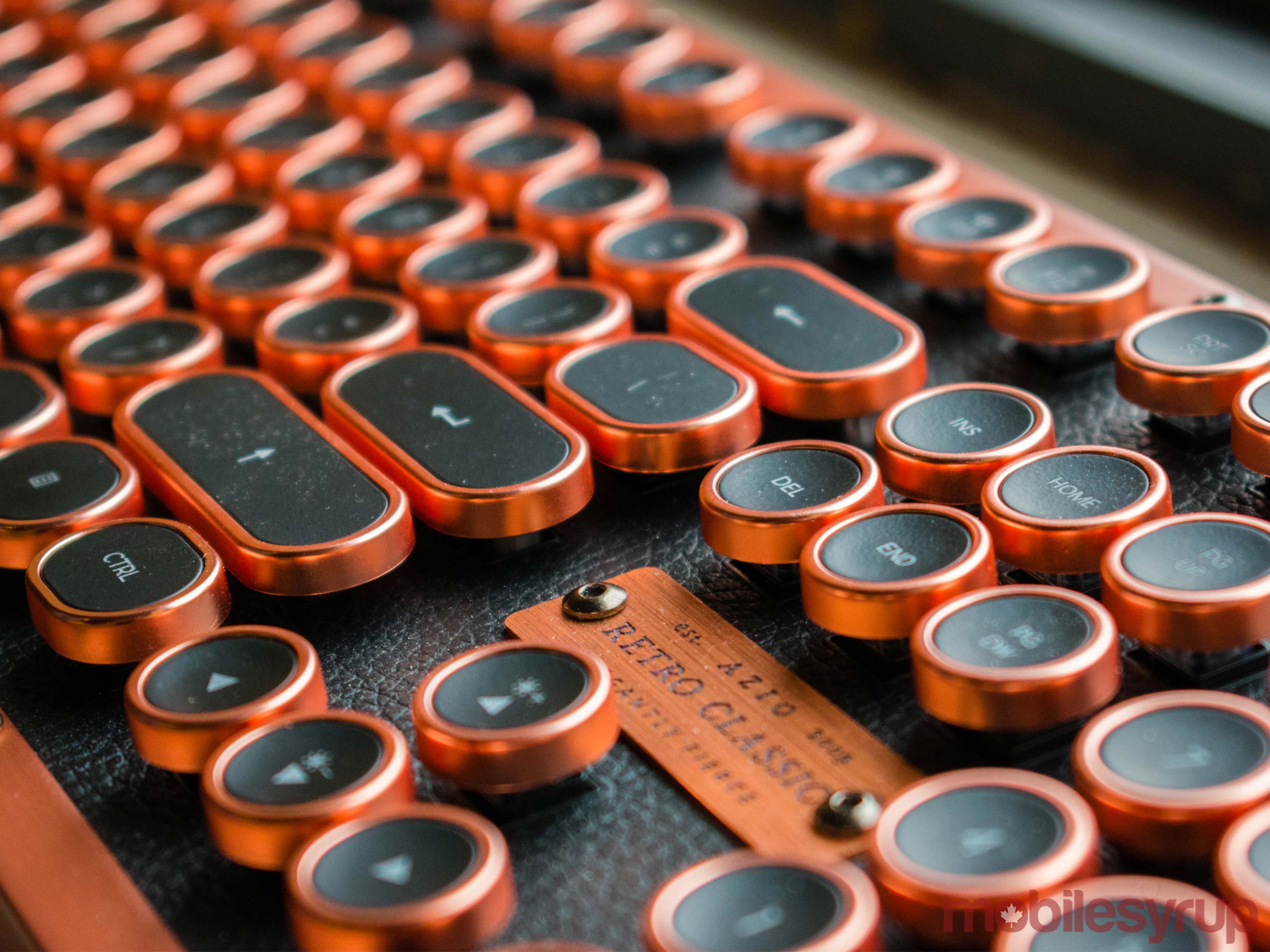 As far as I remember — and I should mention that it’s been quite some time since I used my grandfather’s Olivetti model typewriter that stood proudly on his office desk — typewriter keys aren’t supposed to feel so shallow. Granted the keyboard’s key-depth isn’t as shallow as something like the MacBook’s or MacBook Pro’s butterfly switches, but using the Retro Classic’s Azio ‘Typelit’ mechanical switches is a truly uncomfortable experience, nonetheless.

The shallow key-depth problem is further exacerbated by the fact that it takes quite a bit of effort to actually press down an individual key. I’ve never had to think about how strong my hands are before, but not only is using the Azio Retro Classic an uncomfortable experience, it’s a tiring one as well.

I say this without a single shred or trace of insincerity: my hands honestly hurt after typing on the Azio Retro Classic for more than an hour at a time. Playing my MOBA of choice, Heroes of the Storm, was an even more aggravating experience that left my hands bruised and in pain. My muscles ached, my fingers were red, and it felt like my fingernails were going to fall of.

Granted, I did notice that I was able to open jars more easily.

Beauty and the beholder

If one can get past these issues — and as a sucker for something like Cherry’s MX brown switches, I was unable to forgive this keyboard — there’s quite a bit to like about the pomp and circumstance packed into this device.

To begin with this is a startlingly pretty piece of technology. 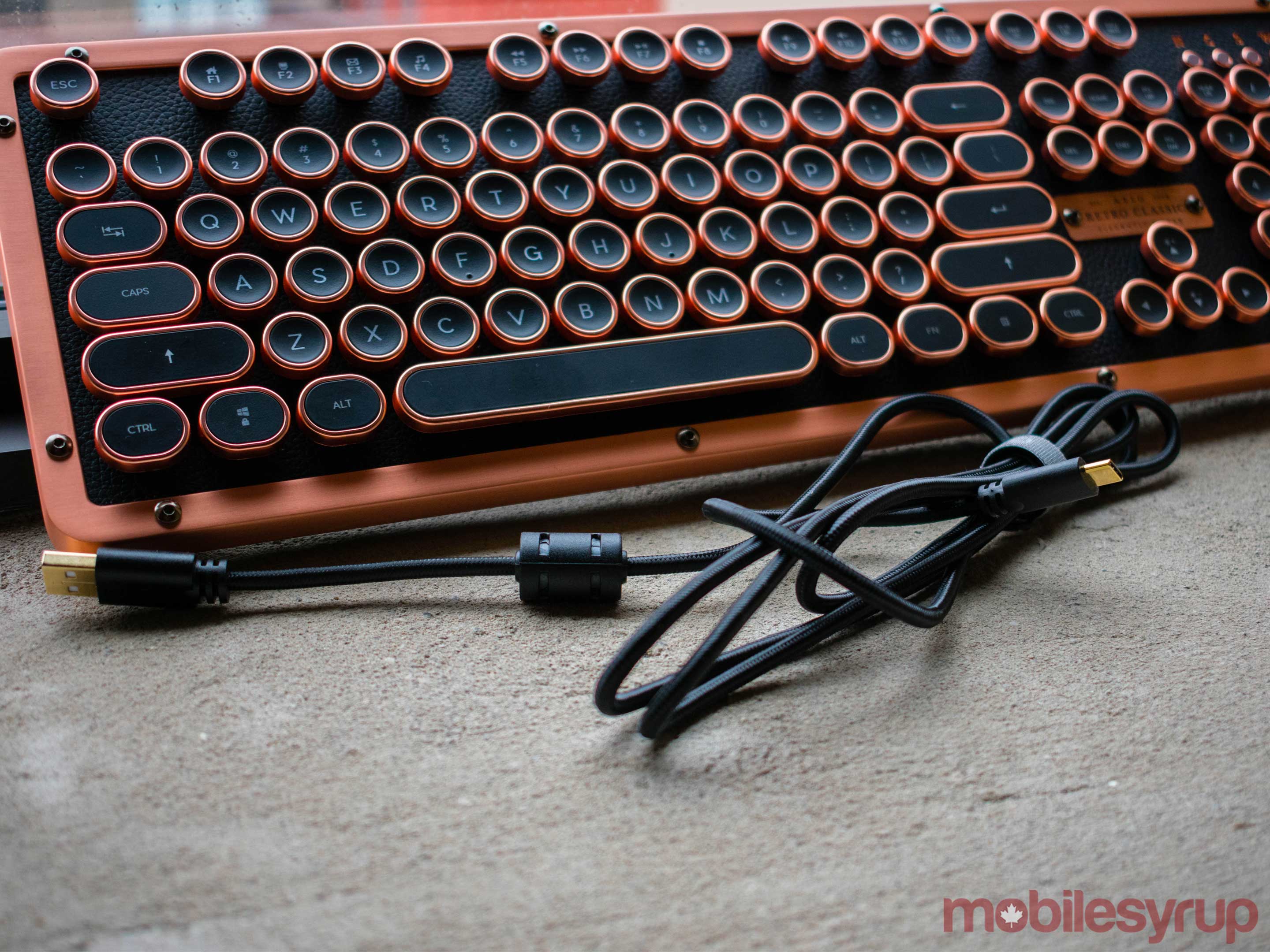 The keyboard comes in four different colour and material variations. I tested the black and orange ‘Artisan’ model, comprised of a combination of black leather and matte copper for the frame. The ‘Onyx’ version is black leather, with a black chrome frame; the ‘Posh’ variant is white leather with a matte copper frame; while the ‘Elwood’ variant is an incredibly stunning combination of walnut wood and matte gunmetal.

Azio also packs in a complete collection of Mac and Windows keys in each box, which means that the keyboard can easily switch between the two operating systems. Additionally, even though Azio sells both Bluetooth and wired versions of the Retro Classic, the company includes a USB-C cable with the Bluetooth model, so that users can continue to type away, even while the device is charging. 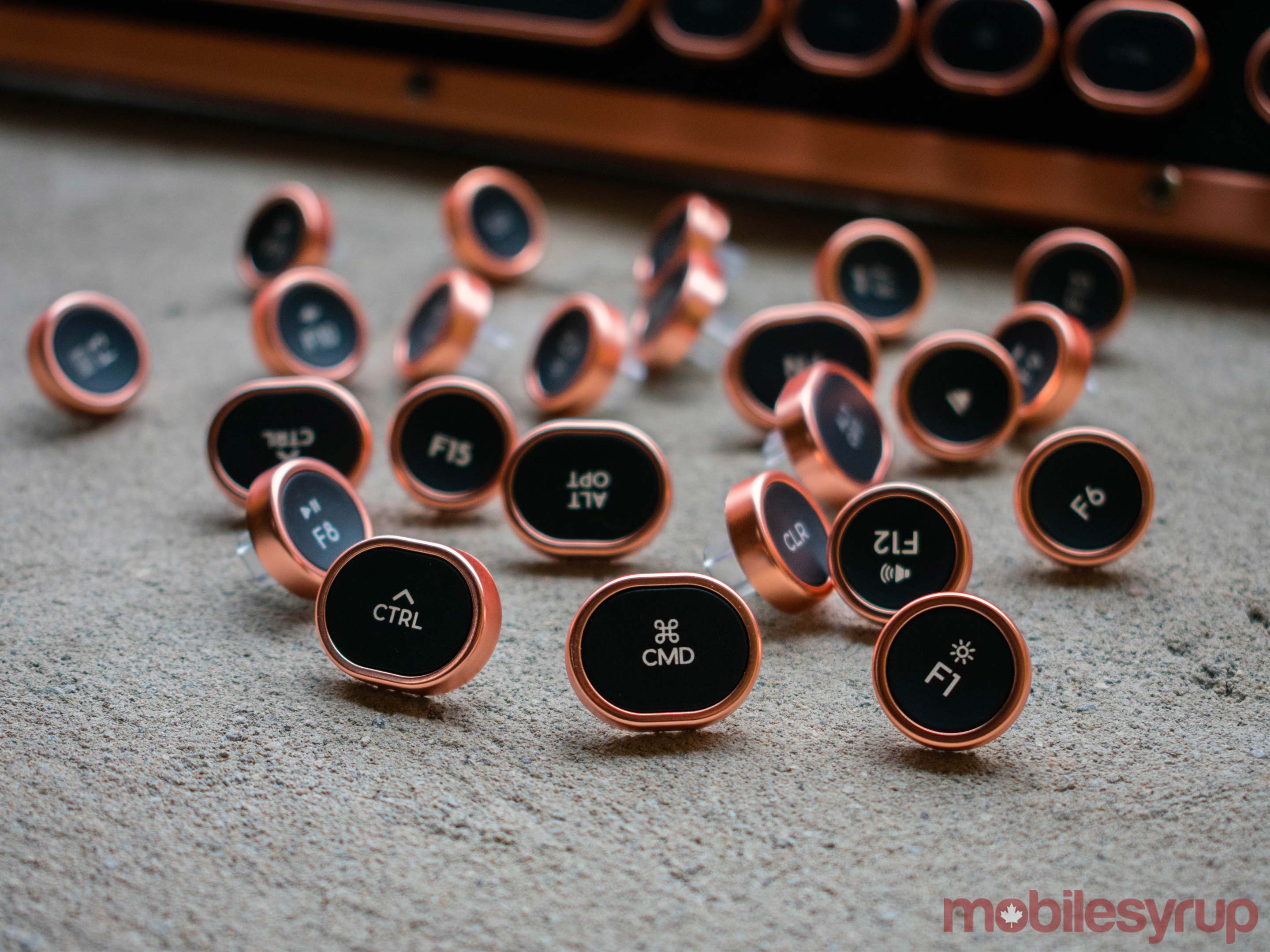 Praising this keyboard for the inclusion of a charging cable might seem odd, but it’s important to note that there are still companies (Apple, notably) that continue to sell wireless products that either neglect wires altogether or are simply unusable while charging.

A steep price to pay

In many ways, the Retro Classic can almost entirely be described using equivocating statements. It’s an uncomfortable keyboard to use, but it’s admittedly very pretty. It’s not particularly useful, but Azio’s gone out of its way to reduce user stress as much as possible. 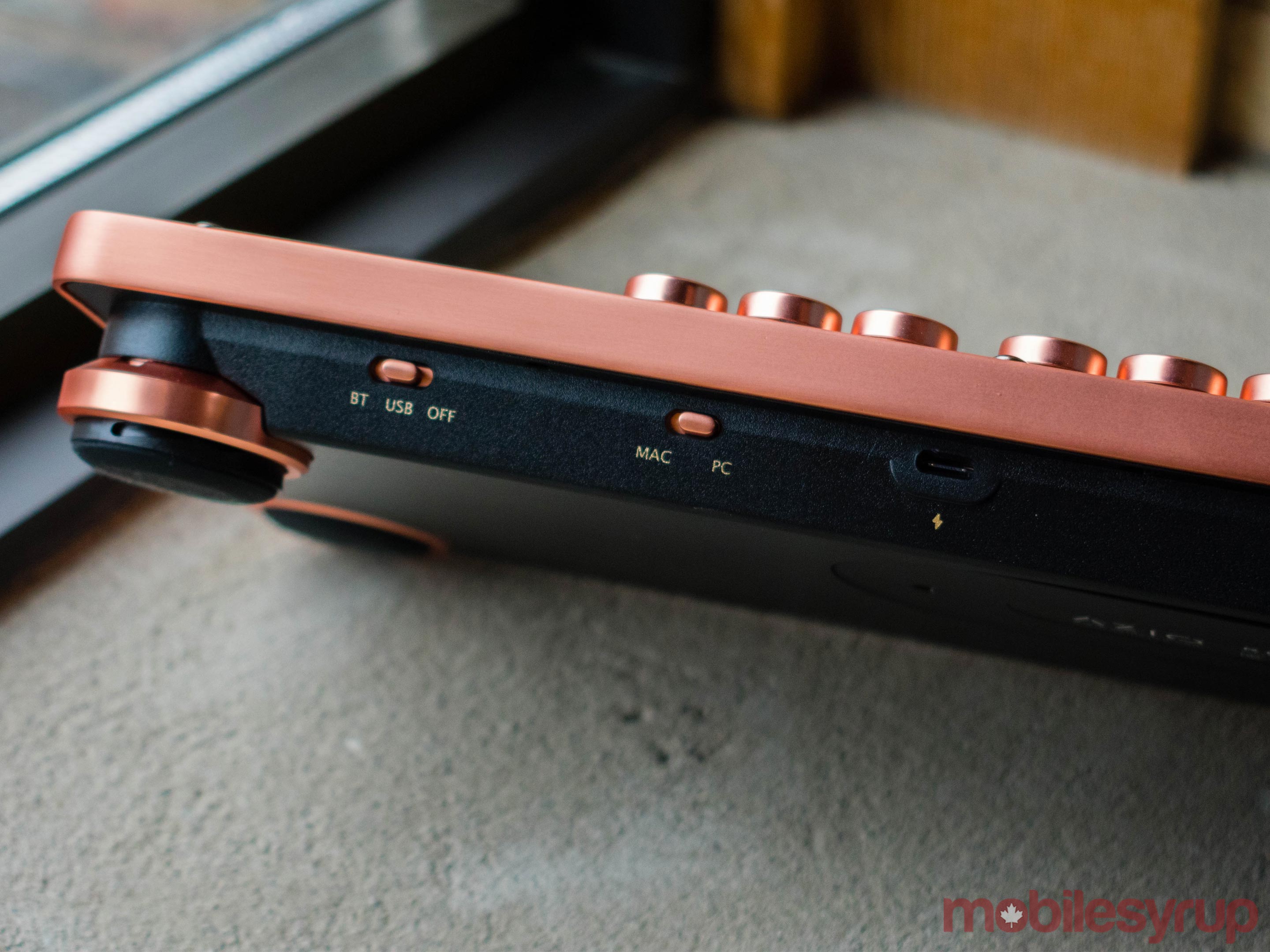 Of course, what will ultimately determine whether or not someone chooses to purchase this keyboard is their willingness to spend about $279 CAD on what is, in effect, a statement piece.