It’s easy to take it for granted, but we live in a world where miraculous things are made possible every day by technology.

From the internet to airplanes, it’s enough to make you feel in awe of who we are and how far we’ve come. Life isn’t perfect here on earth, but humans sure are smart.

If a human from medieval times, for instance, was transported into the future and saw what our society looks like today, they would no doubt believe our modern technology was magic.

Conversely, you’d look like a wizard if you traveled back in time with the ability and were able to recreate some of the technology and machines we use today. 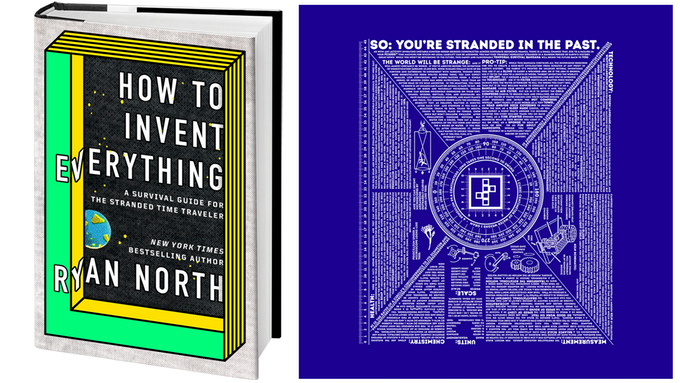 However, if you’re like me and have a great appreciation for technology, but a lesser understanding of how to actually build it — then you’d just end up looking like a weirdo who likes talking about strange machines.

That’s why I’m interested in picking up a copy of ‘How To Invent Everything: The Time Traveler’s Guide,’ which is currently in the midst of a wildly successful Kickstarter campaign.

Author Ryan North asks: “What would you do if a time machine hurled you thousands of years into the past… and then broke? […] Could you, acting alone and stranded at any point in Earth’s history, reinvent our modern world from scratch? Probably not. Not unless you took this book and bandana back in time with you, that is.” 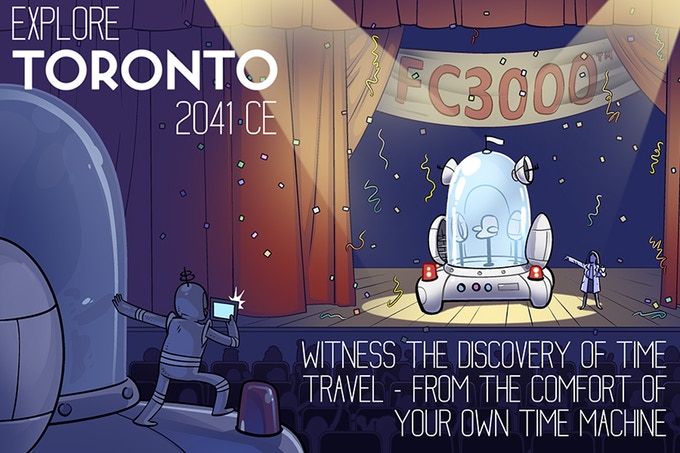 The 464-page tome of text and pictures (drawn by Lucy Bellwood) features chapters like: “Units of Measurement Are Arbitrary, but Here’s How You Can Reinvent the Standard Ones Used in This Book from Scratch,” and “Computers: How to Turn Mental Labor into Physical Labor, So Then You Don’t Have to Think So Hard but Can Instead Just Turn a Crank or Whatever” — the latter of which I think says a lot about how humans have evolved since the advent of computers.

The signed hardcover book — which looks beautiful, for what it’s worth — plus a bandana and postcard pack (Toronto card shown above) are available for roughly $35 CAD on Kickstarter with an estimated delivery date of September 2018.

This is the book I never knew I needed. Even if time travel isn’t real (yet, probably) — I’d still love to at least humour myself that I could be a self-sufficient human. That I could independently recreate some of the greatness that humans have worked together to create.

Perhaps that’s the lesson, though. No human exists in a vacuum. You could not reinvent the modern world from scratch by yourself. You probably shouldn’t even if you had that capability — so much of what we have is great precisely because it was built in a collaborative or competitive process. Because it was molded by people, not one person.

But hey, the pursuit of knowledge and self-sufficiency is also a major driver for human invention.

Plus, I just want to imagine that I could be honoured as a wizard or a god if I went back in time due to my modern-day brilliance. Is that so much to ask?

Note: This post is part of an ongoing series titled Sticky or Not in which News and Telecom Editor Rose Behar (that’s me!) analyzes new and often bizarre gadgets, rating them sticky (good) or not (bad).

As of August 2018, staff writer Brad Shankar will be taking over Sticky or Not as I move on to the next step in my career. You’re in good hands, people. Enjoy!