The Xbox One's impressive, pricey gamepad is back

I’ve used Microsoft’s Elite Xbox One gamepad for the last four years, and it’s easily the best controller I have ever encountered.

The new Elite Wireless Controller Series 2 builds on the first Elite gamepad’s solid foundation, as well as solves a few of its most frustrating design flaws. 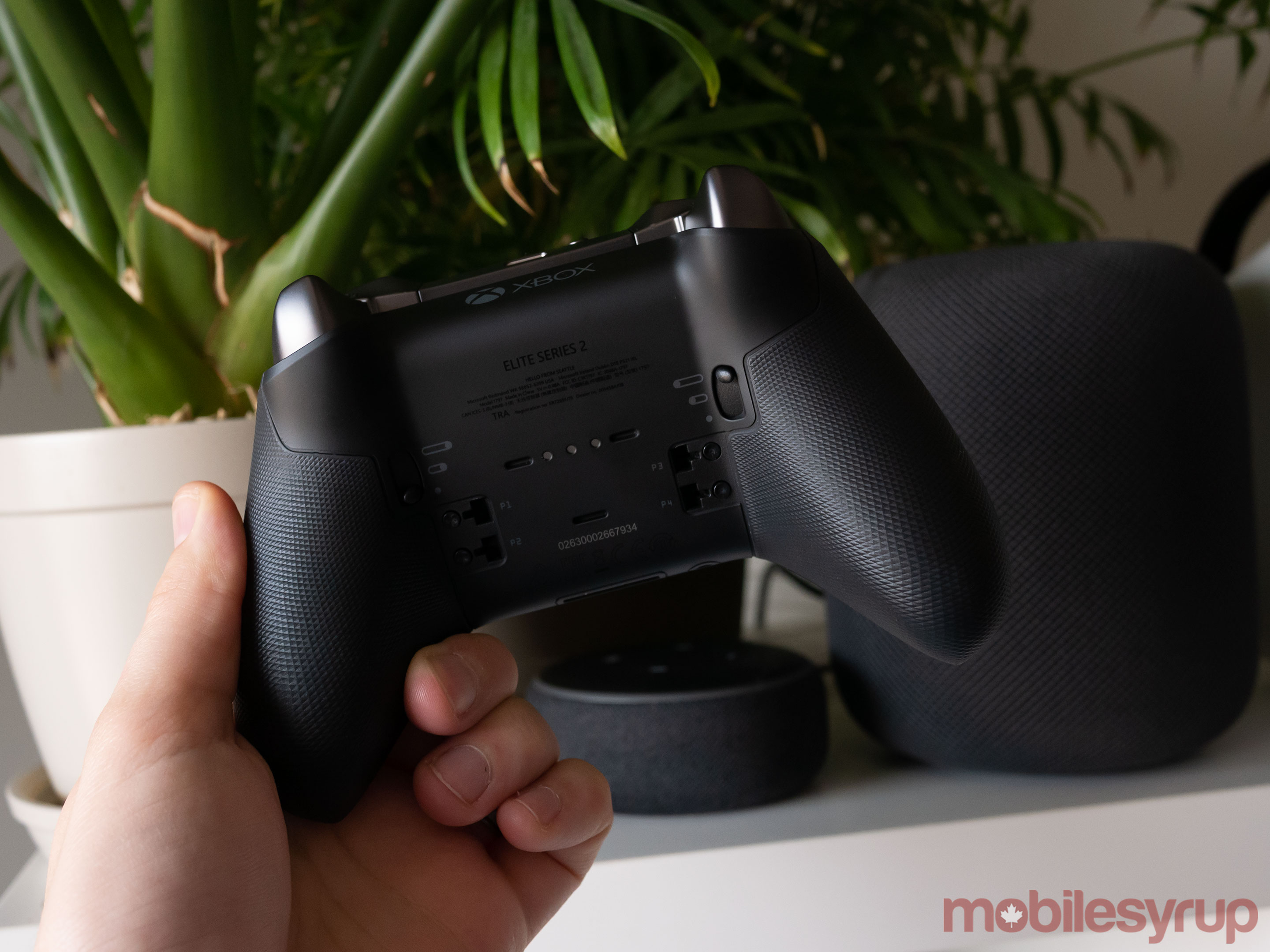 To start, while it’s still too early to know for sure, Microsoft seems to have fixed the major design flaw that caused the Elite Controller’s grips to peel off thanks to its new wraparound rubberized grips that extend forwards to where your thumbs sit.

These grips also seem to absorb less sweat and make the controller feel more grippy, especially if you’ve been using the gamepad for a few hours. Issues related to broken bumpers and the gamepad’s magnetic joysticks falling out of place also seem to be a thing of the past with the Elite Series 2.

Of course, prolonged use will be the only way to know for sure if these problems have been fixed, but at least at the outset, the Elite Controller 2 feels like a far more well-made gamepad. 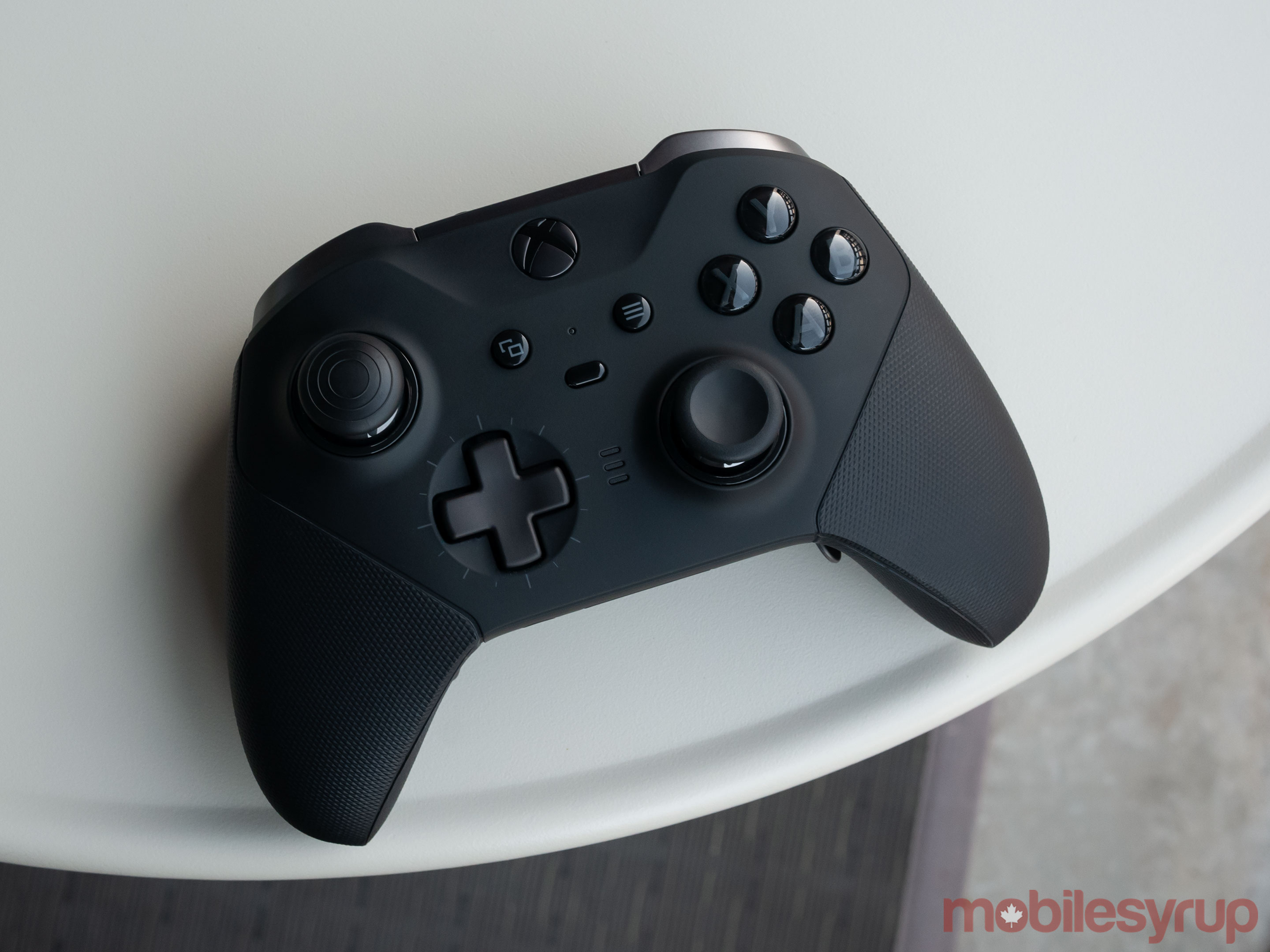 There are other improvements to the controller as well. For example, it now charges through USB-C instead of Micro USB, features Bluetooth connectivity and, interestingly, includes thumbsticks with adjustable-tension.

Being able to shift the give of the gamepad’s joysticks is excellent for first-person shooters and other genres that require precise movement, though I found that I left both joysticks at their default tension.

Increasing or decreasing the resistance of each joystick is a simple process that requires turning a knob with an included SIM card key-like tool under each detachable joystick pad. 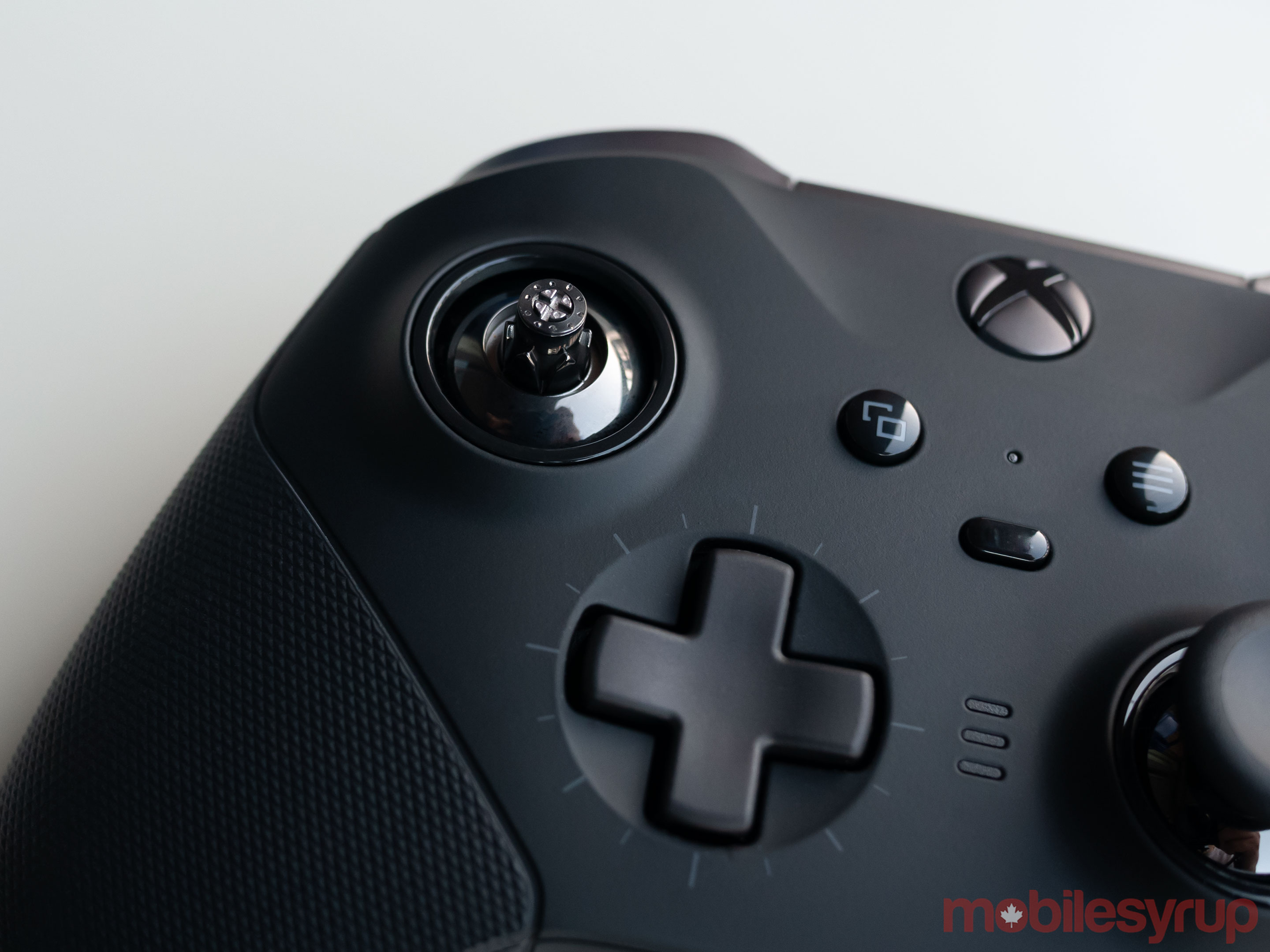 Another significant addition to the gamepad is a third hair-trigger lock that only requires you to tap the trigger ever so slightly. If you’re in your early 30s like myself and your reflexes aren’t what they used to be — but you’re still trying to compete with 13-year-olds in first-person shooters like Apex and Call of Duty: Modern Warfare — this feature is incredibly useful.

While it doesn’t help every time, this additional trigger setting gives you an advantage with specific genres. For example, my weapon fires off a shot in Call of Duty: Modern Warfare near instantly when the third trigger setting is locked, while my opponent is often still pulling their trigger. The triggers are also texturized this time, which makes gripping them slightly easier.

There are other subtle design changes, too. The Xbox button that pulls up the console’s dashboard is ‘clickier,’ and there is also an LED indicator that lights up to indicate what custom gamepad profile you have set. Just like its predecessor, the Xbox Accessories app on the console allows you to completely customize the gamepad’s button layout. 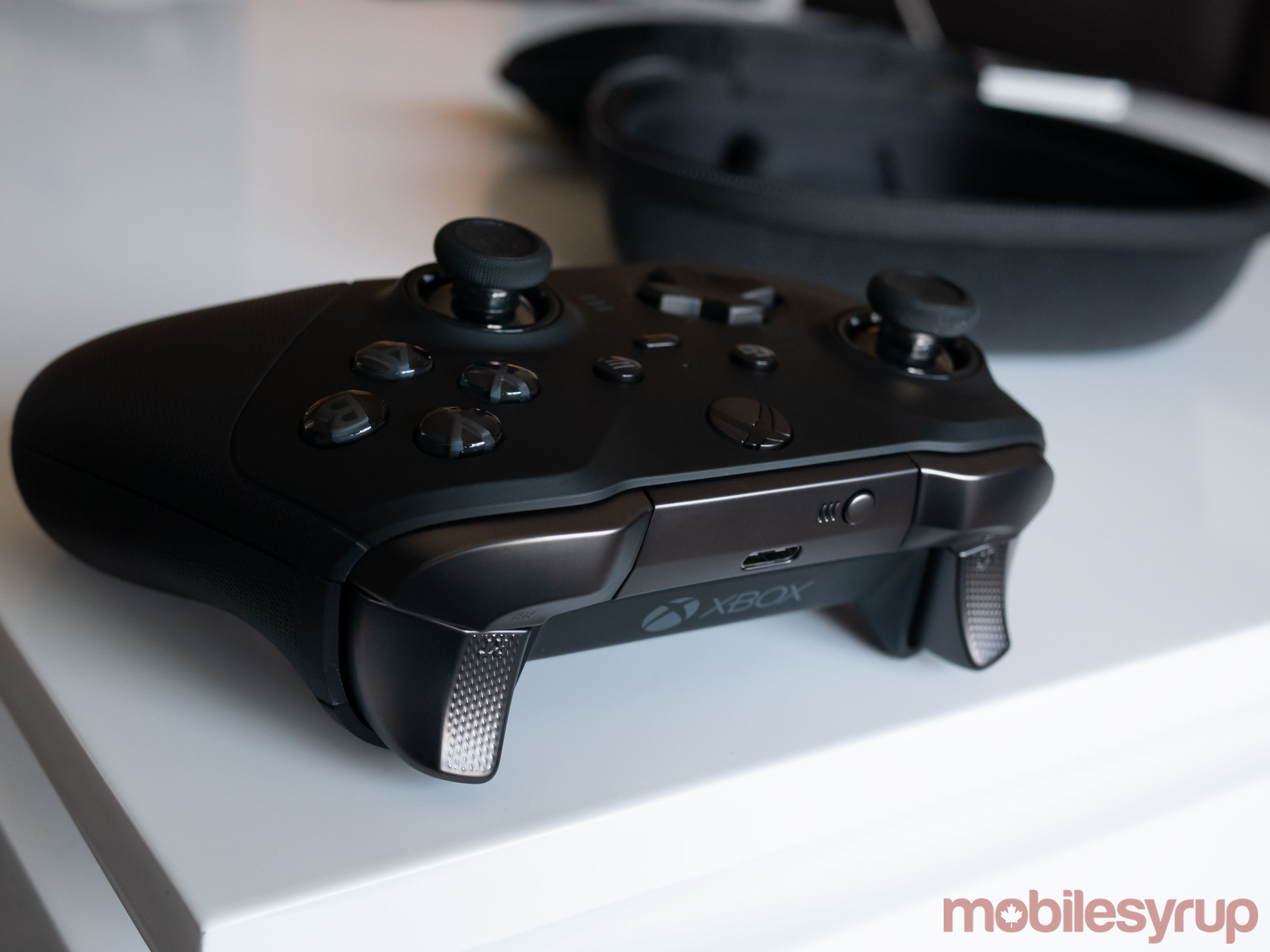 There’s unfortunately still no, on-controller mapping feature, which could be an issue for some people. The number of customization options in the Accessories app is a little overwhelming, and I didn’t find that I needed to go that in-depth with how I planned to use the gamepad.

Still, it’s nice the option is there. The rear paddles that I have never found that useful are also back with the Elite Series 2. I used them briefly but ended up removing them, just like I did with the first Elite Controller. Depending on what you want from the Elite Seriers 2 though, you might find the paddles more useful.

The Elite Series 2 also features a magnetic dock that charges its new internal battery. While I haven’t found I needed to recharge the controller yet, Microsoft says that it lasts 40 hours on a single charge. Given the gamepad’s expensive price tag, it’s great to see Microsoft finally including a sizable built-in battery in the controller. That said, the charging pad is a little awkward to dock the Elite Series 2 on properly. It’s also worth noting that with prolonged use, the Series 2’s internal battery will begin to hold less of a charge. 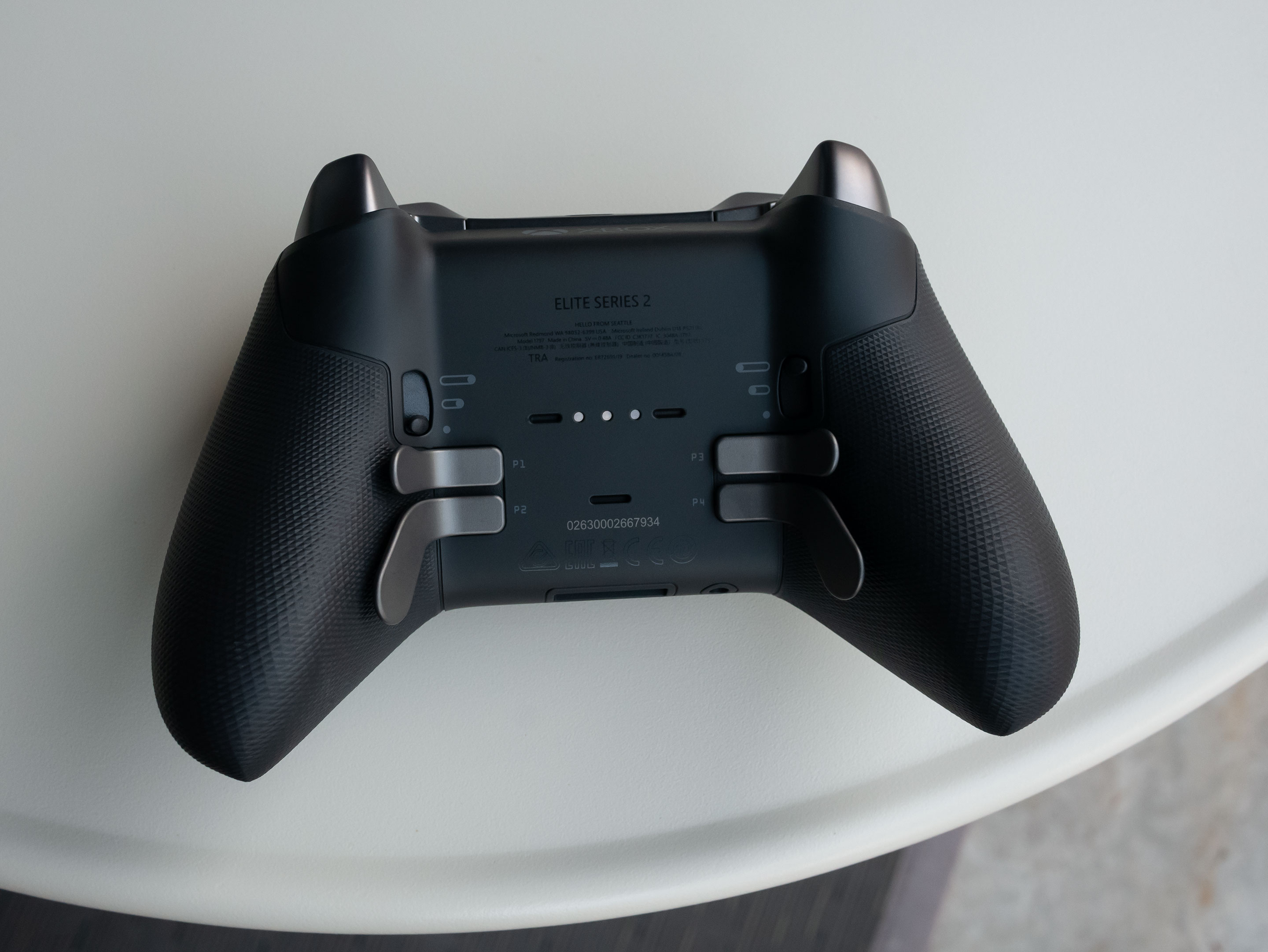 Just like the original Elite Controller, the gamepad comes with six replaceable thumbsticks, including two standard ones, two that feel like the Xbox 360 and a tall and wider-ridged option. You can also still swap the D-Pad for a circular version. I ended up using the standard joysticks and the more traditional d-pad, but how you set up the controller ultimately comes down to personal taste.

It’s worth noting that the fact that the Elite Series 2 features both Bluetooth and USB-C support makes the gamepad great for iOS, Android, PC and even Apple TV. It will also be excellent for using with Microsoft’s upcoming Project xCloud when it’s released at some point soon.

The only significant issue I’ve had with the Xbox Elite Wireless Controller Series 2 is its expensive price tag, which comes to $229.99. It might be a premium, impressive gamepad, but anyway you look at this, it’s costly. This will, unfortunately, limit the Elite Series 2’s audience. That said, Xbox has confirmed that this controller will work with the next generation of Xbox. 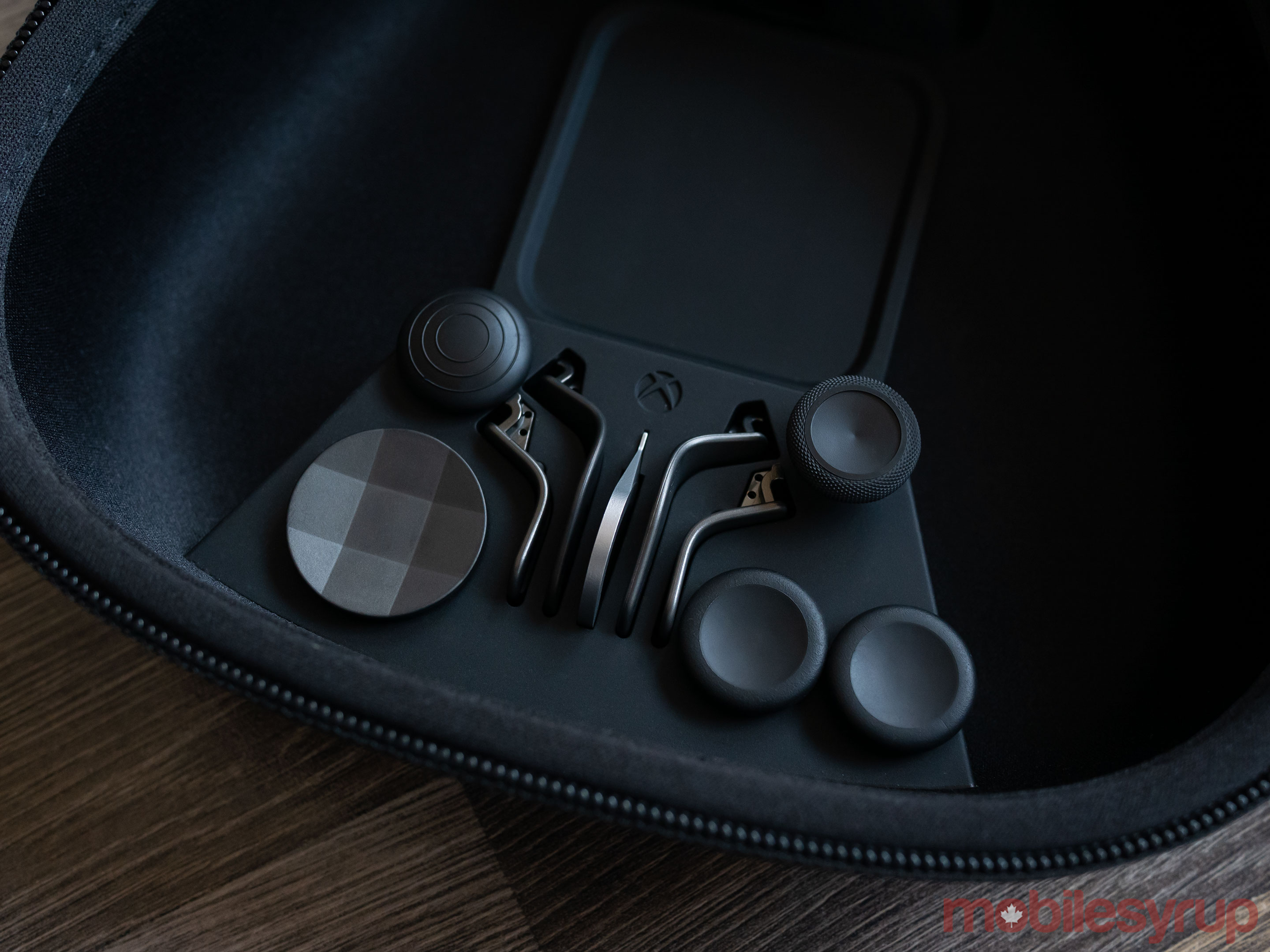 Still, if you’re willing to shell out the cash for the gamepad, there’s a lot to like about Microsoft’s new Xbox One Elite Series 2 Controller.

Update 01/11/2022: Since publishing this review, I’ve experienced significant issues with the Elite Series 2 related to broken bumpers and unresponsive buttons. I still think the Elite Series 2 is a great controller, but it seems to suffer from quality control issues.