The mobile connectivity platforms include support for Wi-Fi 6E and Bluetooth 5.2

Qualcomm announced two new FastConnect systems that will “raise the bar” for the next generation of mobile Wi-Fi and Bluetooth performance.

The company says its new FastConnect 6900 and 6700 mobile connectivity systems were built from the ground up to power better mobile experiences. Further, the systems bring advanced features, such as support for Wi-Fi 6 features on the new 6GHz band, or Wi-Fi 6E. The new systems support multi-gigabit speeds — up to 3.6Gbps on the 6900 — low-latency performance and Bluetooth 5.2.

For those who haven’t heard of Wi-Fi 6E, it refers to the new band of 6GHz spectrum made available for ‘unlicensed use’ in the U.S. The FCC allocated roughly 1,200MHz of spectrum in the 6GHz band for unlicensed use, effectively tripling the total available spectrum for Wi-Fi.

Wi-Fi 6 devices still operate on 2.4GHz and 5GHz bands, while Wi-Fi 6E devices can take advantage of both Wi-Fi 6 features and the new spectrum. 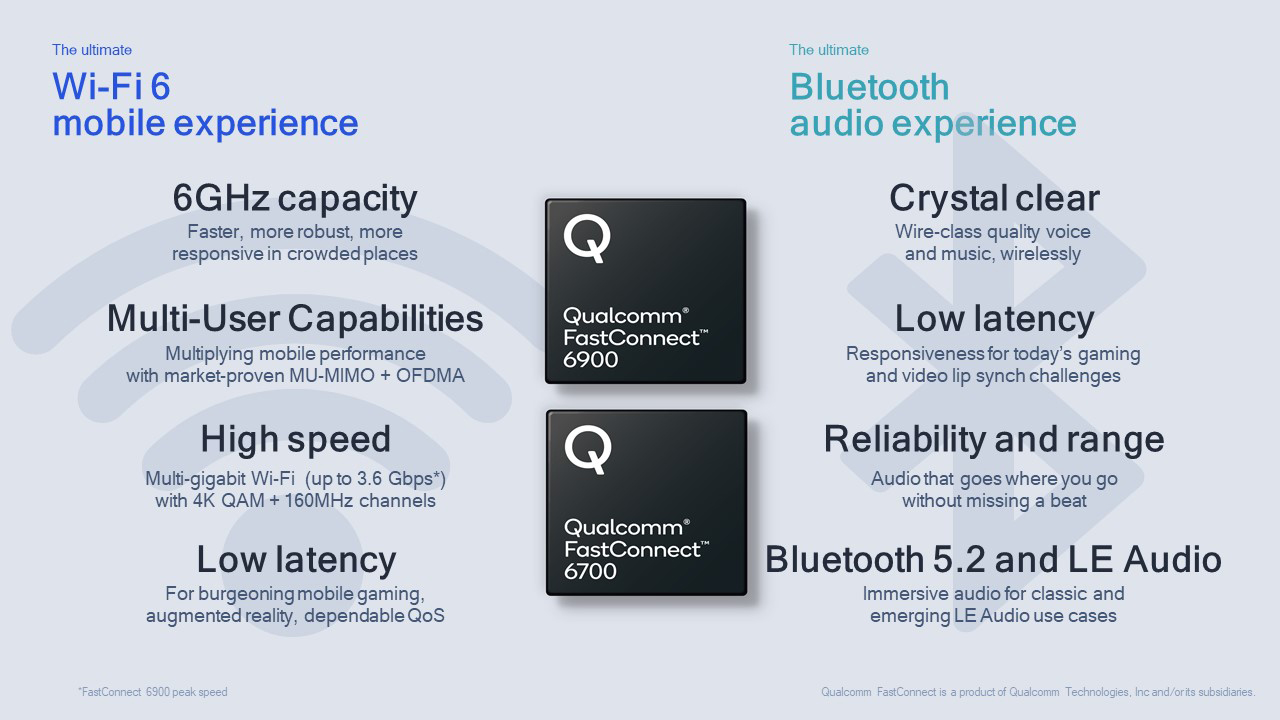 Qualcomm likens the expansion to driving. On some roads, you can only go as fast as the car ahead of you. In those scenarios, even the fastest cars can’t go at their top speed. However, the chip maker says its new FastConnect systems are like getting on the nearly-empty 6GHz highway.

Along with support for the new Wi-Fi 6E, FastConnect 6900 and 6700 carry forward the 6800-series’ uplink and downlink MU-MIMO and OFDMA tech. Additionally, there’s support for the Qualcomm 4K QAM modulation technique, four-stream (2×2 + 2×2) Dual Band Simultaneous (DBS) for data transmission on the 6900 and support for dual-band 160MHz channels.

Finally, Qualcomm says the new FastConnect systems can leverage Wi-Fi 6 connectivity on 6GHz bands to push latency below 3ms, which will help significantly in virtual and mixed reality (VR and XR) applications.