The government has released its first quarterly report tracking the progress of its commitment to reduce the cost of wireless plans in the 2GB to 6GB range by 25 percent over the next two years.

It reveals that in the majority of Canadian provinces, the 25 percent reduction target has not yet been met for mid-range plans between February and June.

Prices in Quebec are the only exception, as the cost of 2GB and 4GB data plans in the province were already lower than the January 2020 benchmark prices.

For context, the benchmark price, or the price to which the 25 percent reduction will apply, is based on prices advertised on company websites in early 2020 for post-paid, bring your own device (BYOD), unlimited talk and text 4G/LTE plans in the 2 to 6GB range.

The benchmark for 2GB plans is $50, and after the 25 percent reduction, the target is $37.50. 2GB plans from Fido, Koodo and Virgin Mobile in Quebec generally cost $35, indicating that prices in the province already meet the reduction target. 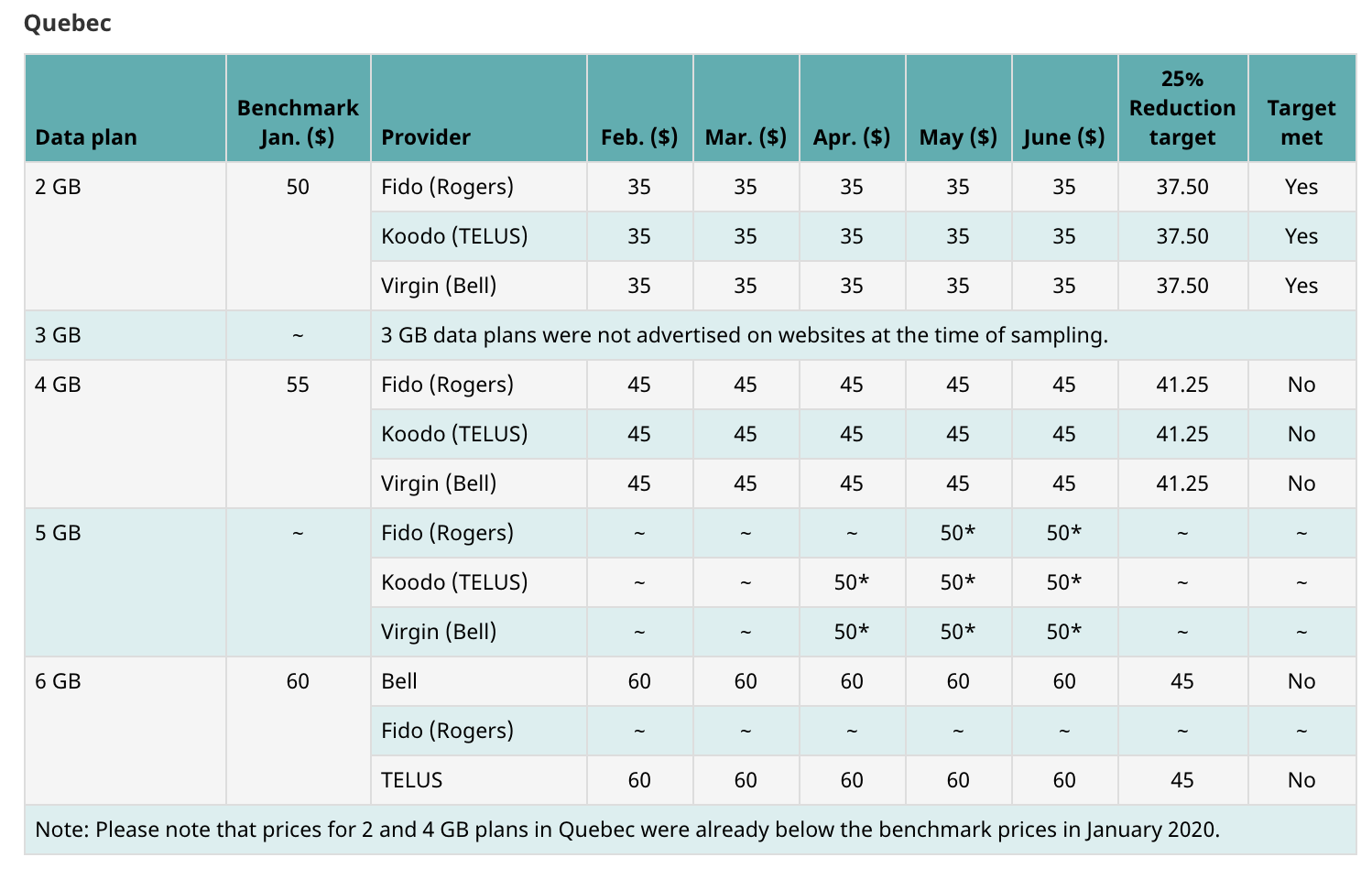 Although prices for 4GB plans in the province have not yet met the 25 percent reduction target, which is $41.25, they are already below the $55 benchmark at an average price of $45.

The report outlines that wireless prices for mid-range plans in the rest of Canada have not yet reached the 25 percent reduction target for the available mid-range plans.

“Our government is optimistic that it can continue working with the big three providers to reduce the cost of mid-range wireless services by 25 percent over the next two years. The tracker launched today will help monitor progress toward this goal,” said Innovation Minister Navdeep Bains in a news release.

If these options are not offered to Canadians by then, the government will look at other regulatory tools to further increase competition in the marketplace and help reduce prices. 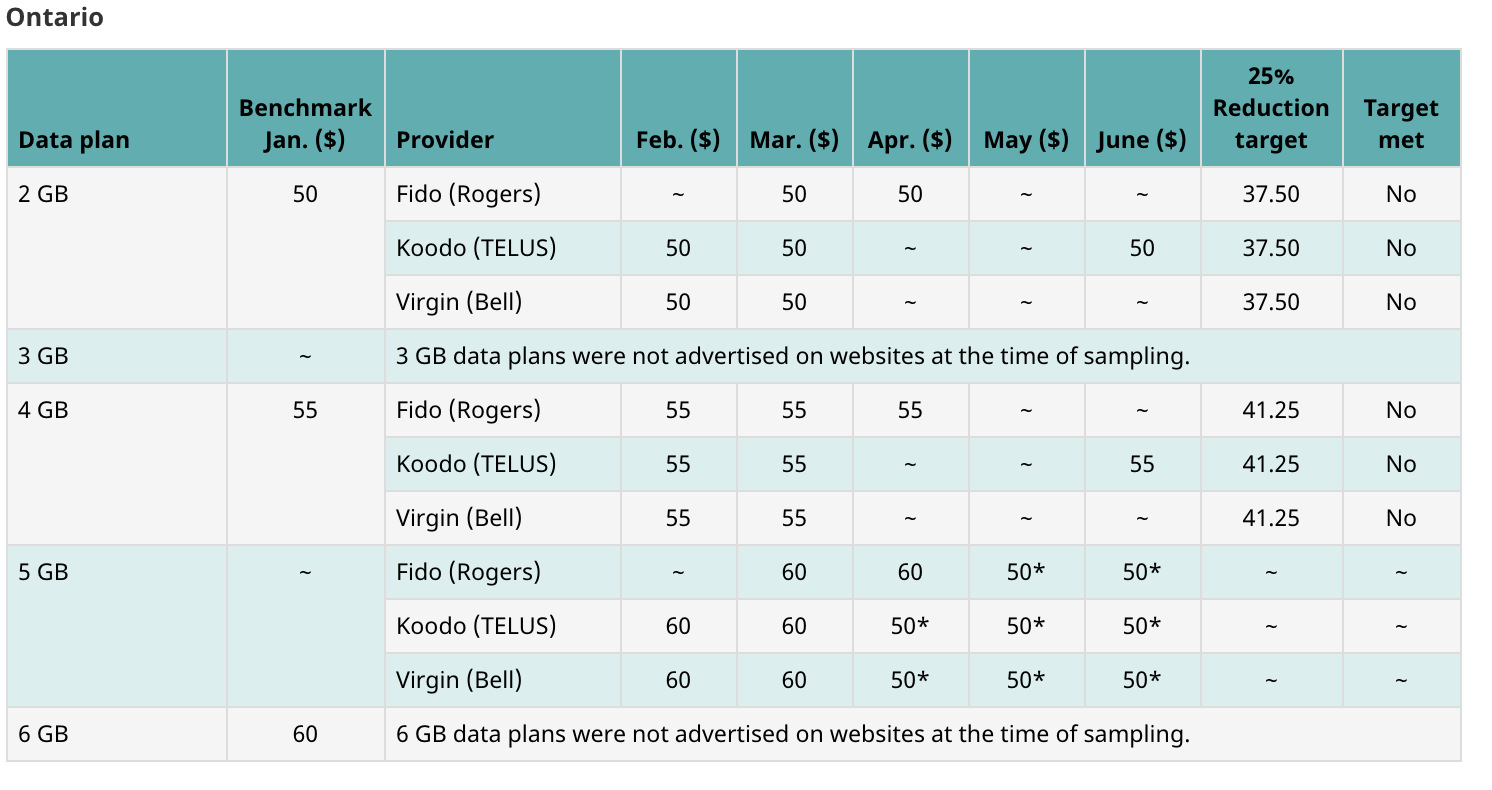 “If the companies are unable to get that 25 percent target, we will look at additional regulatory measures. For instance, we will consider how we deploy spectrum or how we asses the roll-out of MVNOs, to drive more competition and in turn reduce prices,” Bains told MobileSyrup in an interview earlier this year.

In March, the government detailed the different benchmarks for the mid-range plans. The benchmark for a 2GB plan is $50, and with the 25 percent reduction, it would bring the price down to $37.50 per month. The government says this would save a family of four $12.50 a month, $150 per year and up to $600 overall.

Lastly, the government outlined that the benchmark for a 6GB plan is $60 and that after the reduction, it would come down to $45 per month. This translates to a family of four saving $15 in a month, $180 a year and up to $720 overall.

The report indicates that carriers haven’t yet significantly altered their wireless plans. It’s also worth noting that some areas don’t offer plans that meet the categories and prices set out in the report.

Innovation Minister Navdeep Bains told MobileSyrup earlier this year that “Canadians will judge for themselves which companies are honouring that 25 percent commitment through the reports that are going to be published based on the data that is collected.”

The government notes that price monitoring will be ongoing, and wireless pricing data on these plans will be updated quarterly going forward.

A spokesperson from Telus told MobileSyrup that the carrier is “committed to developing plans that meet the needs of Canadians and will continue to refine our offerings as those needs evolve. PwC, The CRTC, and NERA all concluded that Canadian mobility plans continue to decrease in price, while increasing in value through larger data buckets.”

Further, Bell stated “the government data is a snapshot in time and prices are actually coming down across the country in an intensely competitive market. We continually adapt our offerings in response to consumer demand and to provide ever greater value, like our 8GB plan which offers 33 percent more data for the same price as the 6GB $60 government benchmark.”

Rogers notes that it continues to “to evolve our services to deliver more affordability, value and choice to meet the needs of Canadians. Over the past five years, the cost of data across Rogers brands has decreased 50 percent and prices continue to decline. We offer a range of options across our three brands for customers to choose from based on their budget and needs.”

Update 29/07/20: The article was updated to include comments from carriers.