When Apple unveiled its Apple Arcade game subscription service in March 2019, one of the most intriguing titles to be shown off was Fantasian.

But fast forward two years and we’ve actually seen very little of the game, outside of what could be gleaned from occasional pictures shared to Twitter by Sakaguchi and, in one case, even Apple CEO Tim Cook himself. 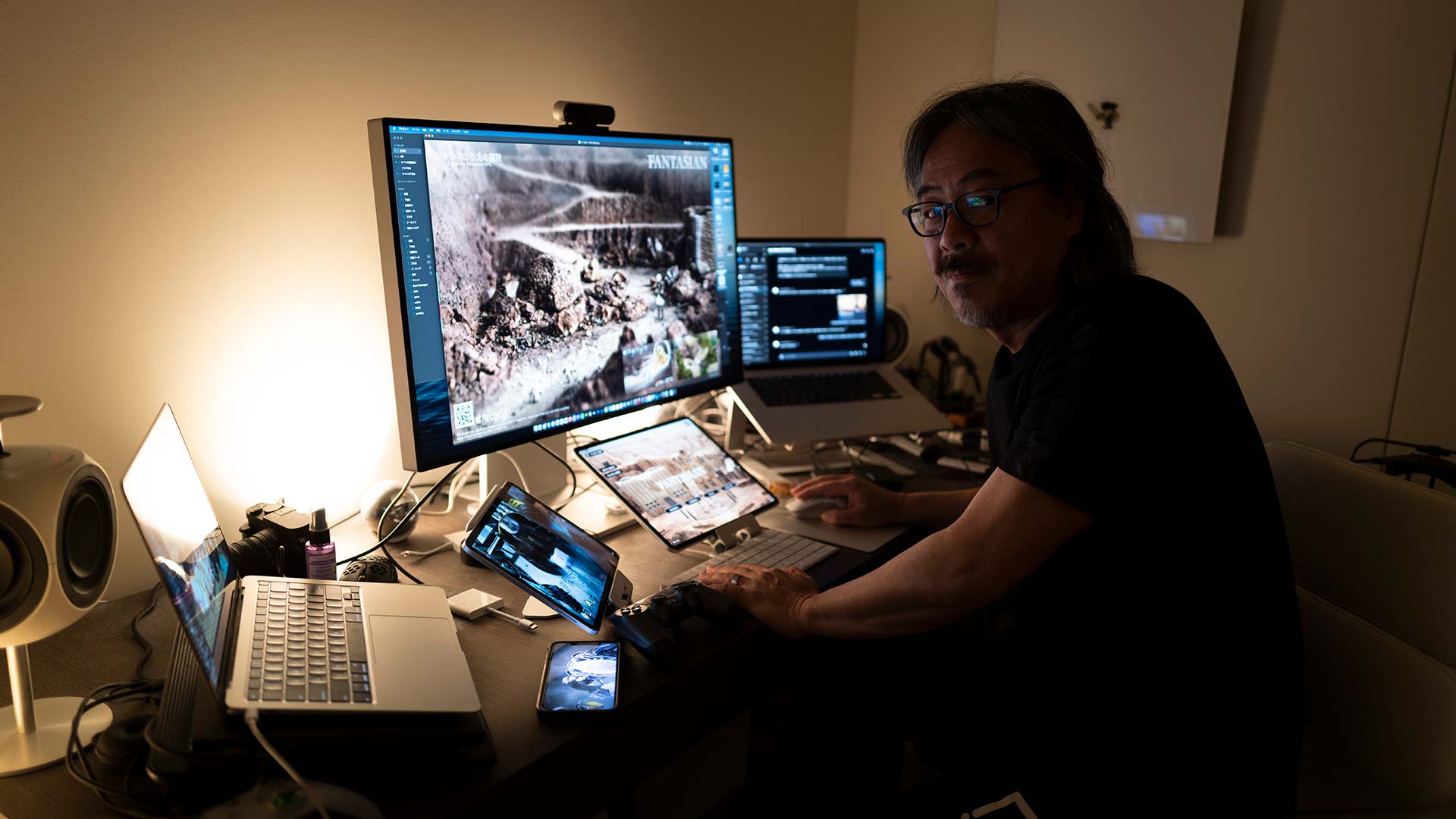 That’s all changing, as Mistwalker is finally pulling back the curtain on Fantasian, which should prove more pleasantly familiar than fans of the 58-year-old legendary designer’s work might have expected from the Apple Arcade game.

Speaking through a translator, Sakaguchi tells MobileSyrup of a time about three years ago when he replayed Final Fantasy VI with some old colleagues with whom he made the game. Waxing nostalgic, he notes that the experience was like “flipping through old diaries” that brought back fond memories of “the passion [that] the team really poured” into those older titles.

“It reminded me how much I really loved this genre and wanted to make a game like this again.”

With Fantasian, Sakaguchi says he wanted to capture “the essence” of classic RPGs like Final Fantasy VI, which — whether he’d admit it — are widely regarded to be some of the greatest the genre has to offer.

“I think [it] comes down to, for example, when you see around the corner in a town, ‘Oh, is there an alleyway over there? Let me go check it out. ‘Oh, I went to the end of it and I found a treasure chest,'” he says. “There’s some reward — that joy of exploring — when it comes to an RPG.”

Naturally, Fantasian will have the sort of exploration, towns, non-player characters (NPCs) and turn-based combat that you’d expect from this type of game.

But Sakaguchi has also made sure to create the memorable stories, characters and worlds that defined his previous works.

“It comes down to the setting, and in Fantasian, we really set out to make a very unique world [that’s] constructed by this multidimensional setup with a human realm and, on top of that, a machine realm.” 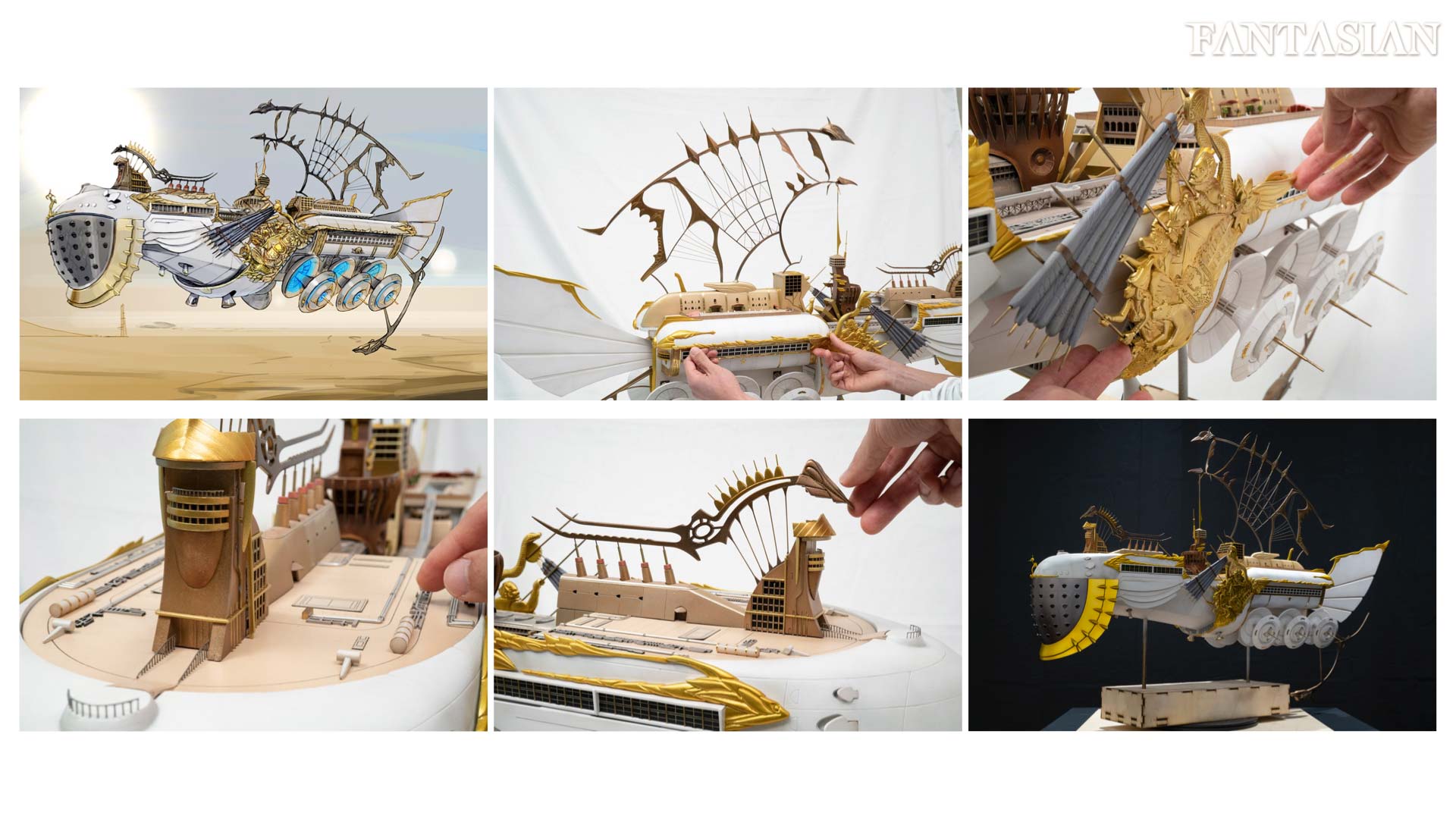 And what a unique world it is. As previously mentioned, Mistwalker has taken real dioramas and scanned them into Fantasian to create the game’s worlds. To help with that, the studio enlisted a variety of experts from Japan’s “Tokusatsu” special effects industry, who have themselves worked on world-renowned projects like the Godzilla films, Ultraman and Attack on Titan.

The dioramas give the game a stunning and distinct visual style that’s reminiscent of what Sakaguchi and his team created with the pre-rendered backgrounds of the groundbreaking 1997 PlayStation RPG Final Fantasy VII.

“We were trying to explore and push the boundaries with what’s possible in terms of visual expression,” says Sakaguchi of the decision to use the dioramas. He notes that the game features interior and exterior environments comprised of more than 150 incredibly detailed dioramas, ranging from a large, ornate airship to a small moss-covered hut and even a bedroom with a divider equipped with real functional hinges.

“I think there is a very distinctive charm or warmth that you get from the dioramas that any other form of environment can’t really replicate.” 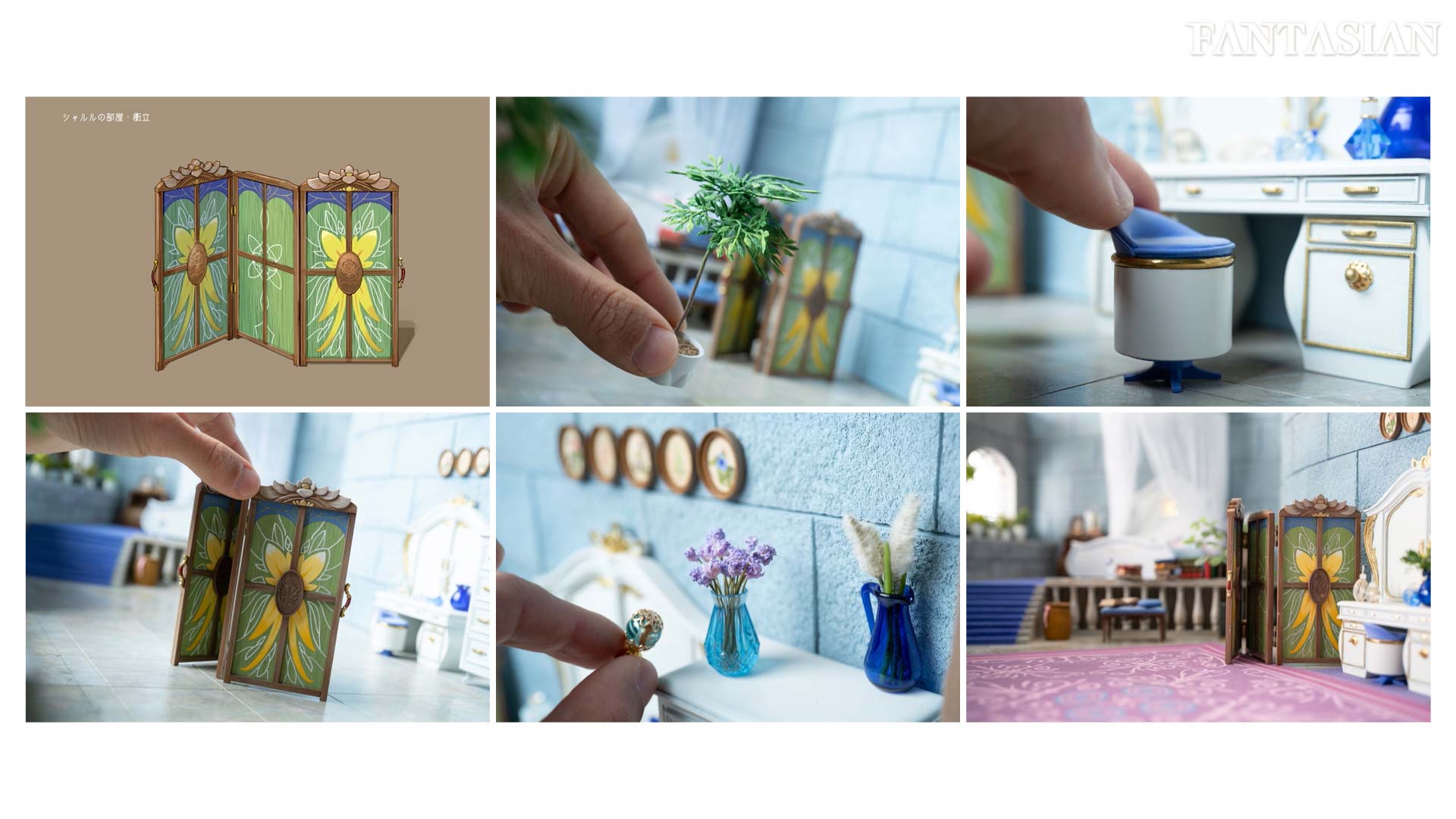 At the heart of these remarkable dioramas is a story about an amnesiac named Leo who sets out to recover his memories and locate his missing father. In keeping with JRPG tradition, Leo will eventually form a ragtag party consisting of such colourful characters as a pair of robots, a princess and an airship captain. All the while, Leo’s quest will unravel the mystery surrounding a mechanical infection that’s slowly overtaking humanity.

“For me, the characters, of course, are also very important, and there are a lot of different relationships and perspectives that they bring to the table,” explains Sakaguchi, who penned Fantasian‘s story. “Seeing those interact with each other, and their journey together — and departure, in some cases — is really touching and moving for the audience.”

While Mistwalker has experience with mobile game development, namely through its Terra series, these games have largely been departures from Sakaguchi’s signature console RPGs.

This made Fantasian a somewhat different beast altogether, as the game’s status as an Apple Arcade title meant that Mistwalker had to develop and optimize the title for iOS, iPad, Mac and Apple TV. In other words, the developer worked to ensure that a Final Fantasy-esque expansive RPG could scale up and down between lower- and higher-end Apple devices. 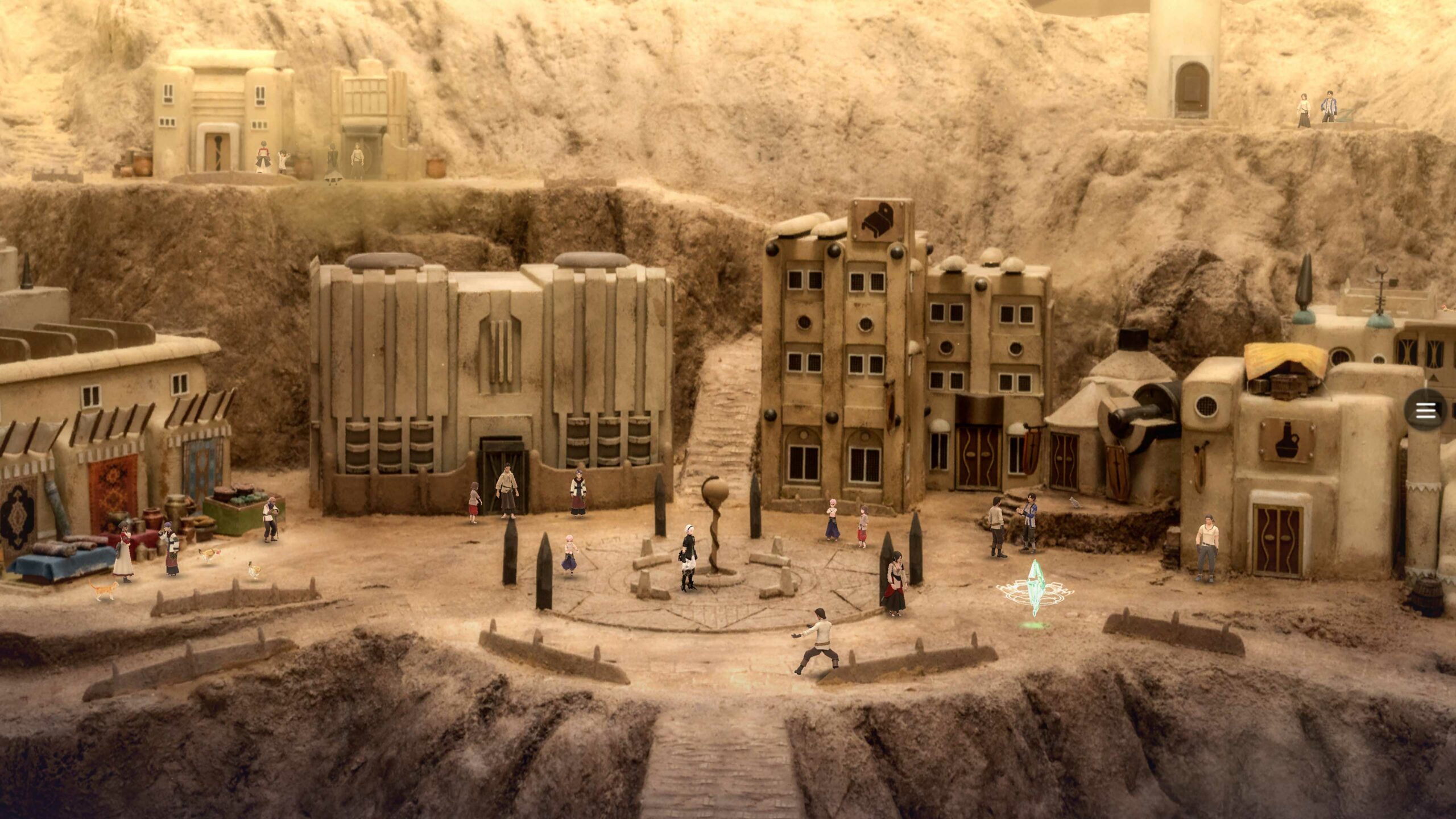 “We developed for a wide range of devices, even up to the highest-spec Mac, and we made the game render in 4K, which would almost feel like we’re developing for one of the cutting-edge console platforms,” says Sakaguchi. “And a challenge in that was actually getting the screen resolution and ratio right to make sure whatever the size, whatever the ratio, the experience is still what we intended for. There was a lot of adjusting that had to happen on the UI side to really optimize that experience.”

On the other hand, Sakaguchi says the game being an Apple Arcade actually lends itself well to the diorama aesthetic.

“This game is going to be played across iPhones and iPads — many tactile-based interface devices. And to me, there is this interesting synergy — it’s almost poetic — that there are these handcrafted dioramas that are literally made by human hands, and through the glass, you’re touching them with your hands,” he says.

“It’s almost like feeling like you’re touching these handcrafted dioramas yourself as you manipulate and move the characters through the worlds.”

Shaking up the formula

On top of giving Fantasian its own unique visual flair, Sakaguchi says the addition of the dioramas actually helped inform the development of some of the game’s mechanics.

In particular, one of Fantasian‘s standout mechanics is the “Dimengeon” system, a mashup of “dimension” and “dungeon,” which actually deviates from the traditional JRPG formula. Like many games in the genre, Fantasian features random enemy encounters that occur in the wild, but where it differs is that you actually have control over when they can happen. With Dimengeon turned on, you can banish enemies to another dimension to fight them later all at once.

It’s a bold take on a classic JRPG staple, and according to Sakaguchi, it’s one that’s been made for two key reasons.

“As we were testing some of these environments, and walking around and exploring them before there were any other random encounters, it actually was really, really fun,” he says.

“We were using a tactile-based interface, where you place pins on the map to direct the characters where you want them to travel to, and one time, I placed a pin a few levels below me where there was a treasure, and just watching the character kind of explore the diorama was a really fun experience. We wanted to give the player the option to not have that interrupted with the random encounters to encourage that joy of exploration.” 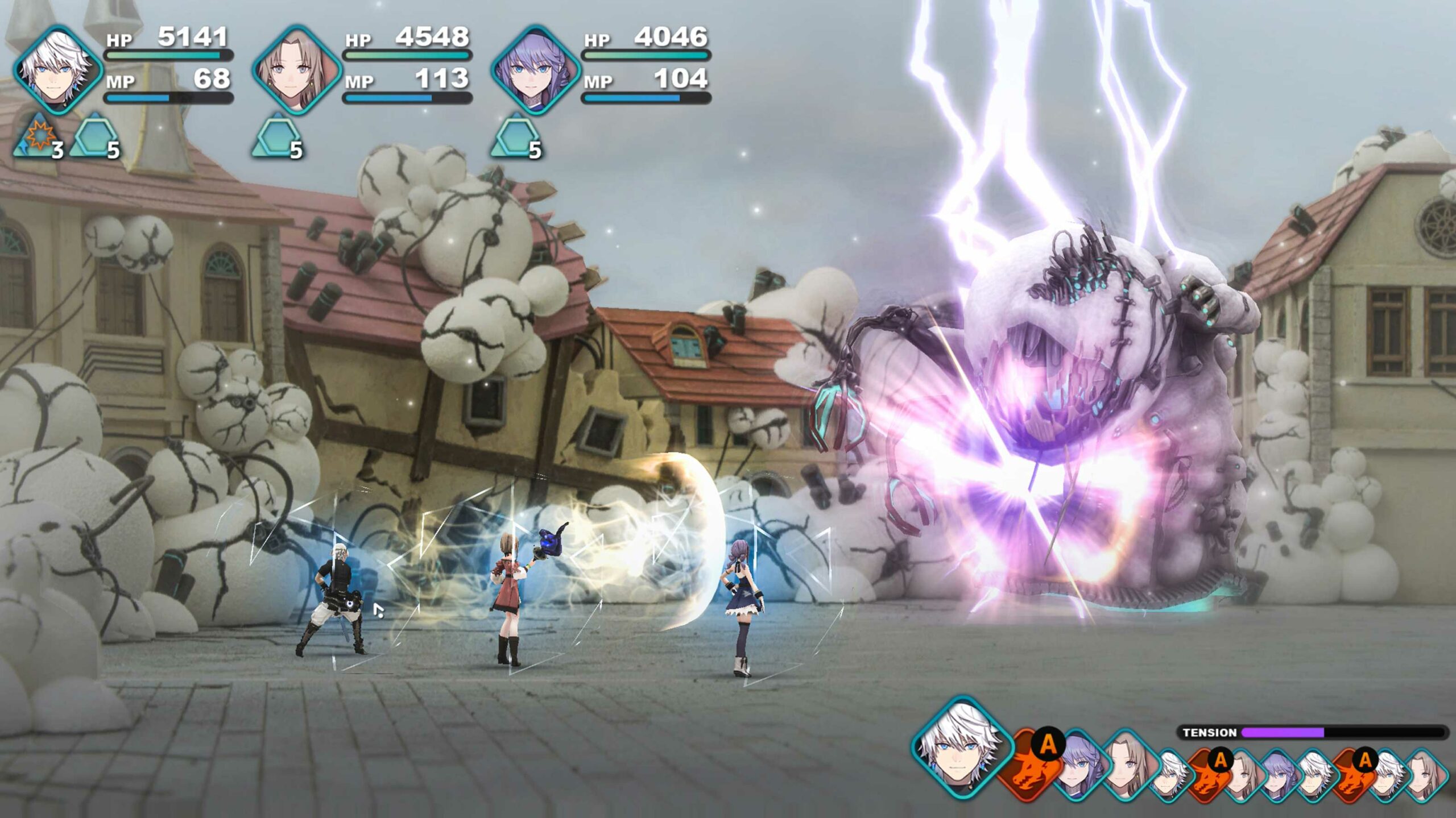 Further, Sakaguchi hopes that this will add a welcome risk-reward element when deciding to fight fewer or greater numbers of enemies and receive their spoils accordingly.

“We wanted to make sure that it didn’t seem like a chore or grind to have to fight a bunch of monsters at once, so we [added] power-ups to alter how the battles unfold,” he adds. “It’s really satisfying for the player to watch as they wipe out and purge these hordes of enemies.” 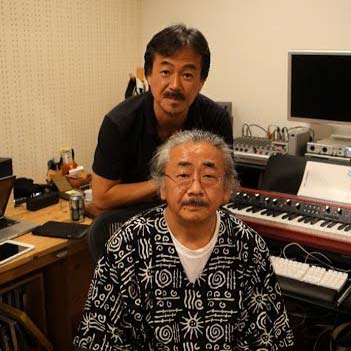 All told, the two have been collaborating for around 35 years, but it almost didn’t happen with Fantasian.

“Before we approached him to work on Fantasian, he was going through some health issues, and there were concerns if he was going to be able to compose everything or if it was even possible for him to work on this,” said Sakaguchi. But ultimately, Uematsu pulled through to compose the game’s entire 60-piece orchestrated soundtrack.

It’s an especially important collaboration for them, says Sakaguchi, as the work required to compose and orchestrate entire soundtracks might prove too difficult for Uematsu going forward.

“I think he kind of hinted that Fantasian is maybe the last game that he does from end to end in terms of scoring an entire soundtrack,” recalls Sakaguchi. While he notes that Uematsu will likely continue to do individual compositions for games — like last year’s Final Fantasy VII Remake, for which he wrote the main theme “Hollow” — Fantasian “might be his last record.”

If Fantasian is to be their last full collaboration, though, Sakaguchi says he’s more than happy with the end result.

“On a positive note, he poured his heart and soul into it. For me, when I heard it, it almost made me tear up a little bit, because it was a very big moment in both of our careers.”

Update 01/04/2021 at 5pm ET: Since conducting this interview, Sakaguchi has confirmed that Fantasian will be released in two roughly 20- to 30-hour parts. The first part is “coming soon,” while the second is set to drop sometime later in 2021.