Aside from the wood styling, these panels don’t offer anything that Nanoleaf’s other Shapes lights can’t do better.

Back in June, Toronto-based smart lighting company Nanoleaf unveiled its latest light panels, dubbed the ‘Elements Wood Look Hexagons.’ I’d offer a snarky remark about the lengthy name, but it’s accurate to what the smart lights are — hexagon-shaped panels that look like wood.

The Elements exist in a weird spot within Nanoleaf’s product lineup. The company recently released Hexagon, Triangle and Mini Triangle panels under its ‘Shapes’ line. Those panels are all interoperable, allowing users to create large light panels with multiple shapes.

Although Elements will work with the Shapes panels (they use the same connector pieces for linking panels), it feels like they aren’t meant to. First, the obvious: Elements panels look like wood, making them stand out when positioned next to Nanoleaf’s plain, white Shapes panels.

Another potential downfall to mixing Elements and Shapes is that the Elements panels only support white light in various temperatures, while Shapes panels have a full range of RGB colours.

Nanoleaf will presumably expand on the Elements panels in the future, probably with more shapes (I’d bet on Triangles) and perhaps even new materials for those who aren’t into the wood aesthetic. However, having spent a few weeks with the Elements panels, I’m not totally sure why someone would pick them over the Shapes options. Aside from the wood styling, the Elements don’t do anything that the Shapes can’t do better.

‘Wood’ you look at those lights! 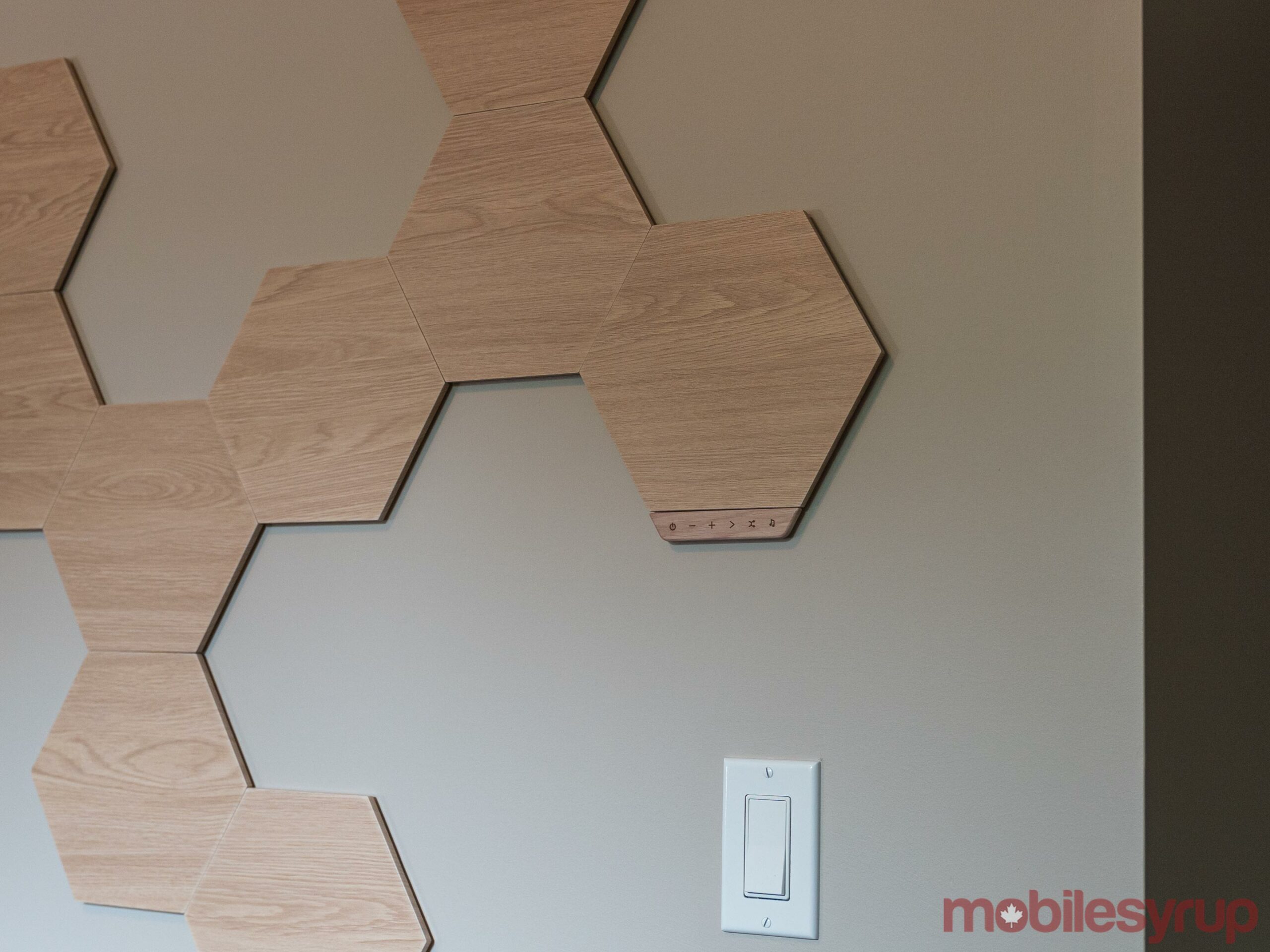 The wood Elements panels look really nice. The wood grain pattern varies from panel to panel and, while it likely won’t fool anyone into thinking it’s real wood, it definitely looks like wood. The styling is also, unfortunately, at its best when the lights are off.

I’ve spent a lot of my time with the Elements panels thinking about that conundrum. Sure, the Shapes panels don’t look the nicest when they’re turned off — they’re just hexagon- or triangle-shaped white panels on your wall. So, the wood styling does solve the problem of making your smart lights look nice when turned off — but is that really a problem?

I’d say for most people, it probably isn’t. Having tested a bunch of Nanoleaf lights, I typically don’t mind how they look when turned off because the point is to have fancy, colourful lights. I use Nanoleaf’s Shapes Mini Triangles on my desk mostly because I like how they cycle through various colours and because occasionally they make for a good photo background. I wouldn’t do the same with the Elements because they’re the first set of Nanoleaf lights that look better when turned off.

When on, the Elements only support various temperatures of white light and the light mostly washes out the wood texture. Further, Nanoleaf designed the Elements panels to be semi-transparent. Unlike the Shapes, which only illuminate the front of the panel, the entire Elements panel will glow, including the edges. It’s a neat effect, but because the panels are a brown shade to blend with the wood, it turns some temperatures more orange than they normally would be. 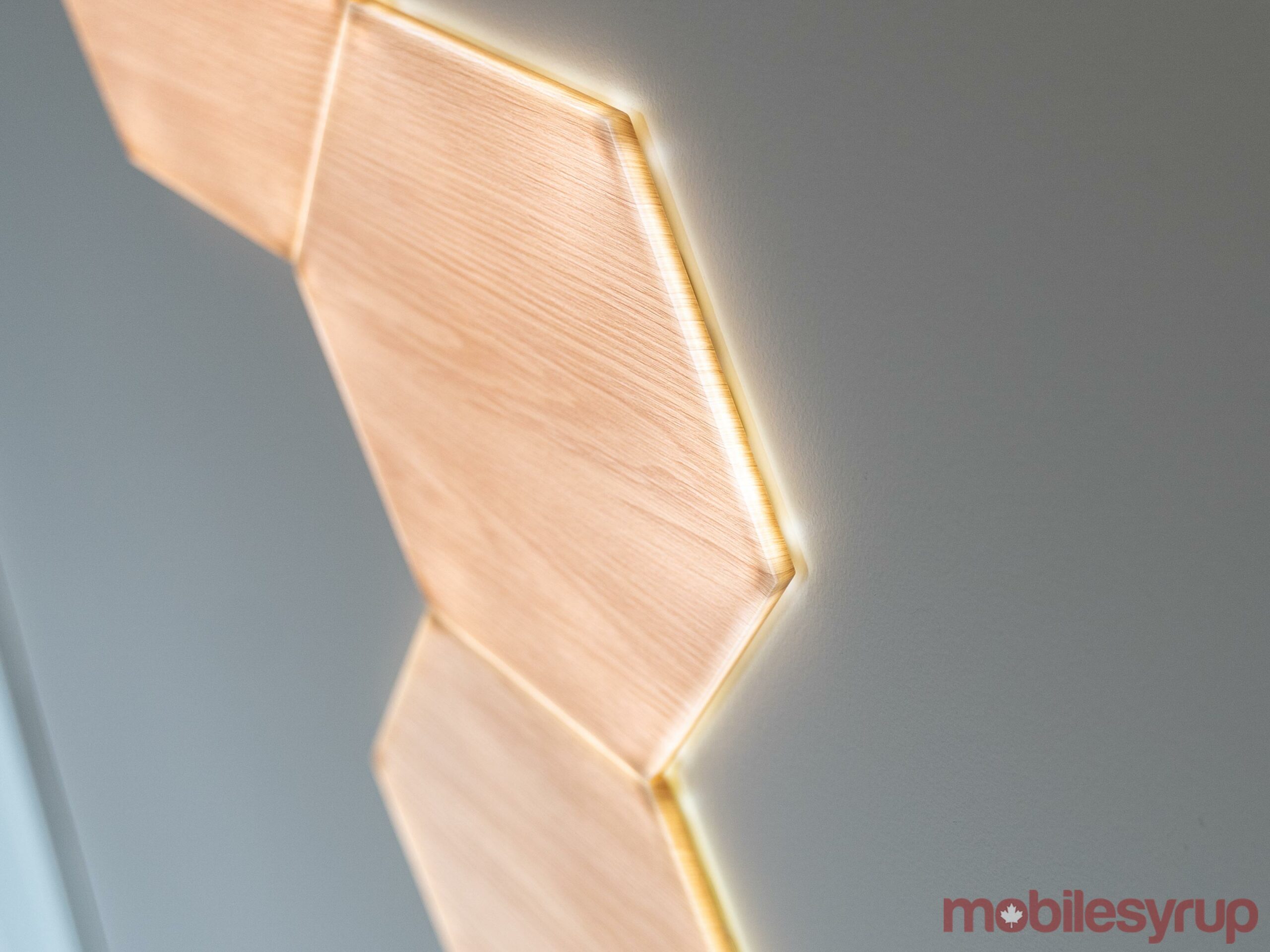 All the other features seen on the Shapes remain. That means the Elements panels can respond to touch or sound and users can control them via the Nanoleaf app, the digital assistant of their choice or by tapping the touch buttons on the attached control block.

Speaking of the app, the Element’s white-only light makes controlling them rather boring. I can set the lights to a brightness and colour temperature of my preference, and that’s about it. Sure, I can apply some of the thousands of ‘scenes’ available in the app, but most of them are designed for Nanoleaf’s colourful panels.

Mounting is a breeze, the app remains a pain point 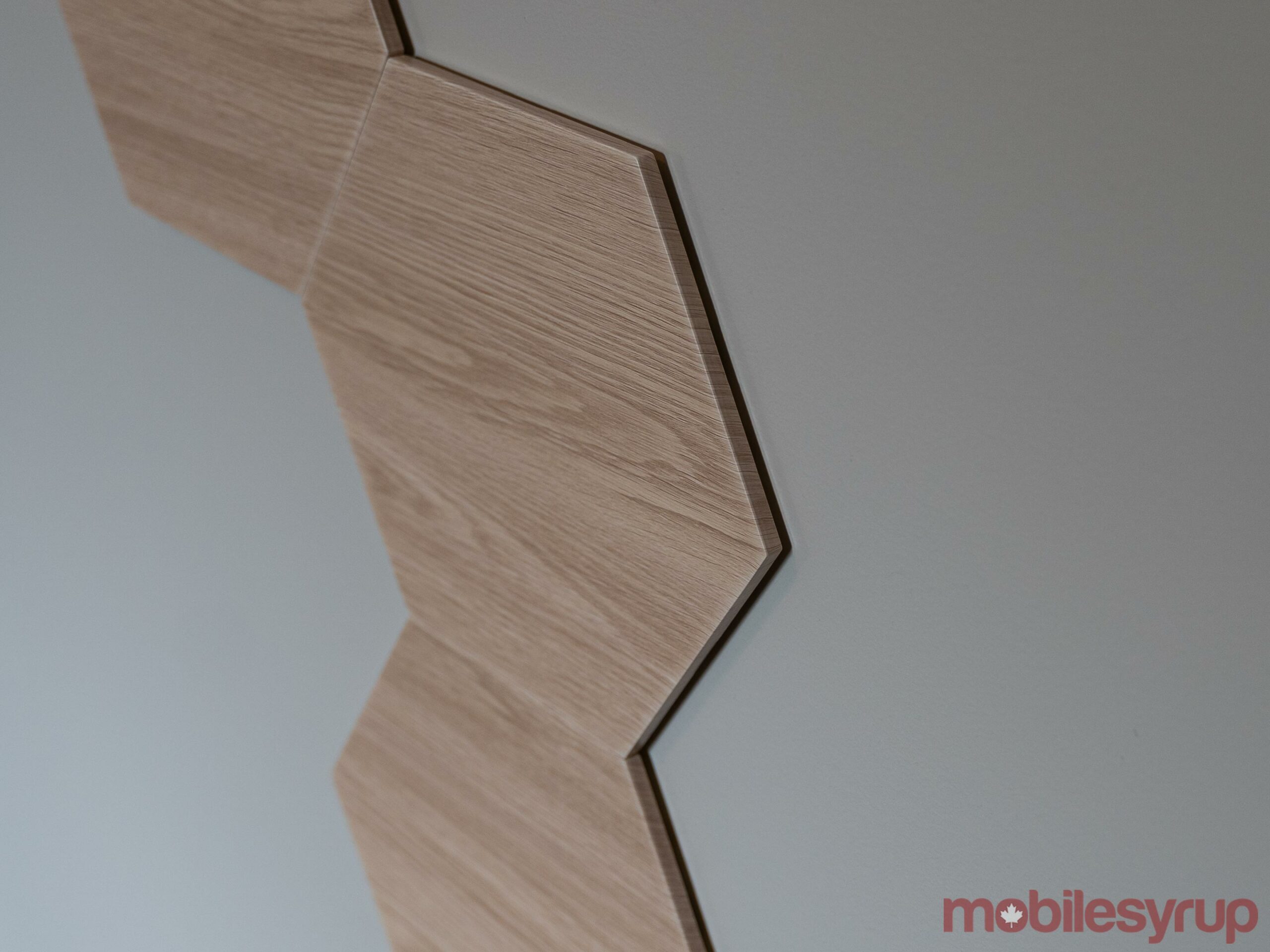 I’ve reviewed several Nanoleaf panels now, but this is the first time I actually mounted them on a wall. The last time I reviewed Nanoleaf light panels, I was preparing to move and didn’t want to mount them just to turn around and take them down again.

This time around, I was able to mount the Elements panels, which was much easier than anticipated. The panels come with double-sided adhesive pads already placed on the back (they reside on detachable plastic pieces so you can remove the panels from the wall and put them back on). Users just need to remove the sticker, place the panel on the wall and press on the centre of the panel to secure the adhesive pad. It’s the same process as the Shapes panels, so if you’ve tried those, you’re set for the Elements panels.

It definitely helps if you take the time to plan out where you want to place your panels before you start putting them on the wall. Overall, the process went quickly and it took me maybe 15 minutes to get the Elements panels mounted securely. 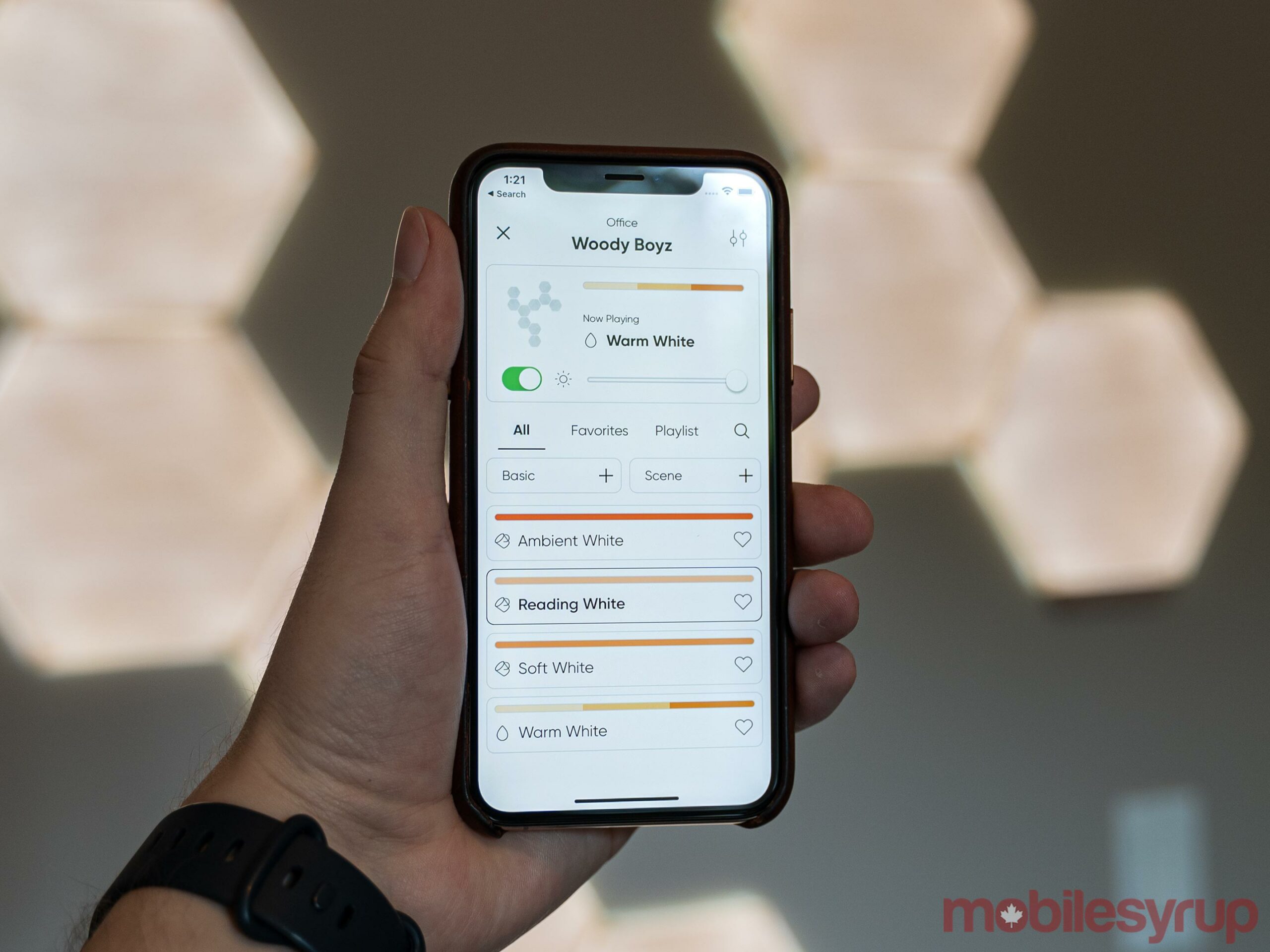 I also want to take a moment to talk about the Nanoleaf app. It generally works decently, but in my experience is a bit more reliable on iOS than Android. I primarily use the app to set up the lights and then control them with Google Assistant, but occasionally I pop into the Nanoleaf app since it offers better controls for adjusting light colours. It also lets you pick ‘scenes’ — Google Assistant works fine for on/off commands and brightness.

I ‘woodn’t’ get the Elements, but maybe they’re right for you 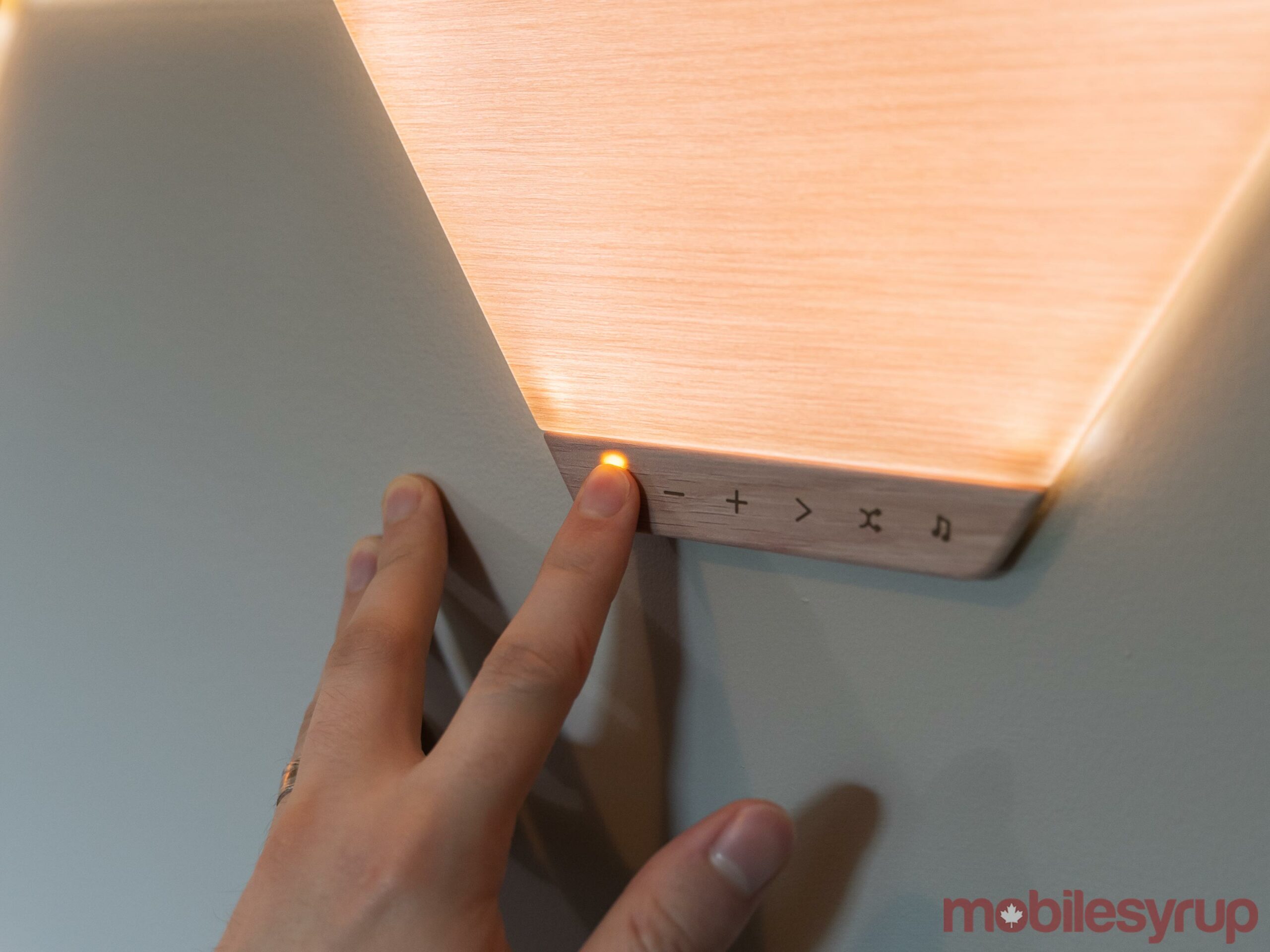 In a word, I think I’d call the Elements disappointing. Coming from Nanoleaf’s other excellent panels, the Elements just feel plain. I can think of one good use case for them: the Elements would be nice in my bedroom by my reading chair for some extra reading light at night. That said, I could also meet the same need with a much, much cheaper lamp.

To be fair, I think the Elements panels could be a great option for some people — they just don’t fit with how I use my lights. Anyone who really, really likes the wood aesthetic would probably enjoy the Elements.

“if you want something that looks more interesting than a basic smart bulb but isn’t as colourful or flashy, get the Nanoleaf Elements.”

Plus, the Elements lights have the benefit of turning into a room feature when you don’t need the extra light.

Ultimately, the question comes down to what you need from your smart lights. Just looking for basic light functionality? Great, buy a smart bulb — you can get them for pretty cheap from some manufacturers, and Nanoleaf even has one if you like that brand. If you want fancy wall-mounted panels capable of displaying hundreds of vibrant colours, get any of the Nanoleaf Shapes.

And last, but not least, if you want something that looks more interesting than a basic smart bulb but isn’t as colourful or flashy, get the Nanoleaf Elements. They’re great lights, but I’m not in the niche market that would like them.

The Elements ‘Smarter Kit’ starts at $369.99 and comes with seven panels and appropriate numbers of linkers, a controller block, power supply and everything else you need to get started. There’s also an Elements expansion pack with three panels for $119.99 (note that it doesn’t come with a power supply, so you’ll need a Smarter Kit first).

Nanoleaf Elements are available from the company’s website as well as retailers like Best Buy and Amazon.