Come for the video game jokes, stay for the surprisingly poignant meditation on people and the creative process

When you hear about Apple TV+, your mind probably goes towards Ted Lasso.

But the streaming service is home to another outstanding comedy series that touches on similar themes yet has gone criminally under-recognized: Mythic Quest. With the series recently being renewed for another two seasons, there’s no better time than now to check it out. (Note: what follows is a spoiler-free take on Mythic Quest).

Created by It’s Always Sunny in Philadelphia‘s Rob McElhenney, Megan Ganz and Charlie Day, Mythic Quest follows a fictional video game developer as it works on a highly popular MMORPG. That premise alone makes the series pretty unique amid the many, many sitcoms out there.

“Mythic Quest never feels like a cynical, pandering look at its subject matter in the way that The Big Bang Theory did with general nerd culture”

While it can definitely fall into the typical workplace comedy trappings at times throughout its current two seasons, Mythic Quest consistently feels fresh thanks to its focus on the day-to-day lives of video game developers. With the show rather surprisingly being co-produced by games publishing giant Ubisoft, McElhenney and co. were given behind-the-scenes looks at the inner-workings of the company’s Canadian studios, and it shows. 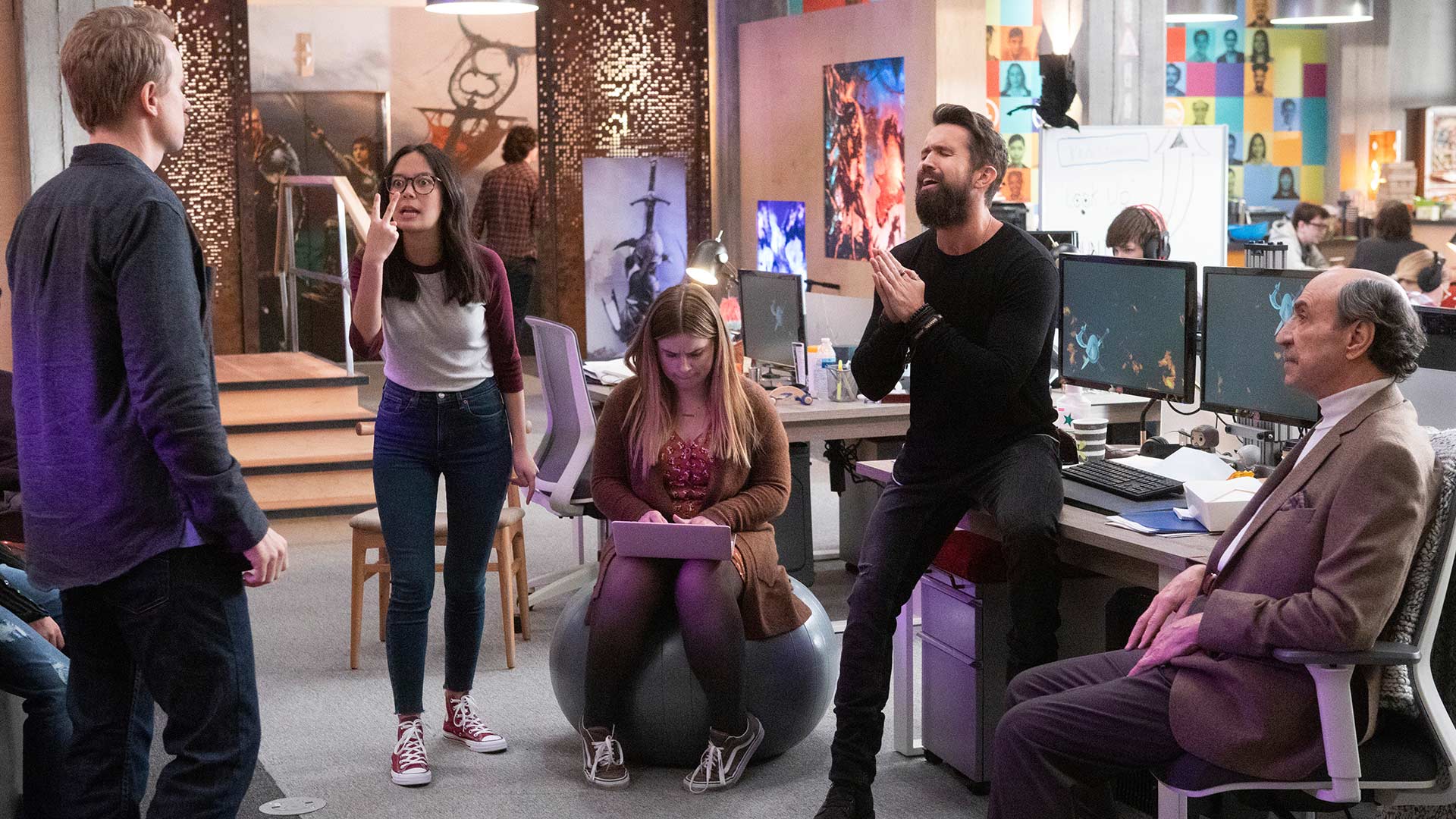 Indeed, Mythic Quest never feels like a cynical, pandering look at its subject matter in the way that The Big Bang Theory did with general nerd culture. McElhenney and his team have clear respect and admiration for the hard work and sacrifice that goes into the craft of game development. That’s represented so brilliantly by an excellent, well-rounded cast that includes the egomaniacal creative director Ian Grimm (McElhenney), ever-underappreciated lead engineer Poppy Li (Charlotte Nicdao), earnest game tester Rachel (Ashly Burch, a gaming industry veteran who also writes for the show), soft-spoken executive producer David Brittslebee (David Hornsby) and his power-hungry assistant Jo (Jessie Ennis).

Through these characters, Mythic Quest tackles everything from everyday sexism and the commodification of art to LGBTQ+ romance and the negative power dynamics of the workplace. It does this by deftly managing a seemingly unwieldy number of subplots in funny-yet-profund ways.

Often, the Mythic Quest studio will find itself at odds with “Montreal,” the ever-looming group of producers that constantly impedes development with unrealistic demands. Or take Sue (Caitlin McGee), the MMO’s community manager, who’s an outwardly comical but nonetheless pointed commentary on the mental cost of directly dealing with rabid, petulant fans online. And the misogynist resistance that game tester Dana (Imani Hakim) faces when trying to branch out into streaming will, undoubtedly, ring close to home for many women. Mythic Quest even works in two exceptional pandemic specials that explore the lows of isolation and the highs of post-lockdown reconnection with ample poignancy. 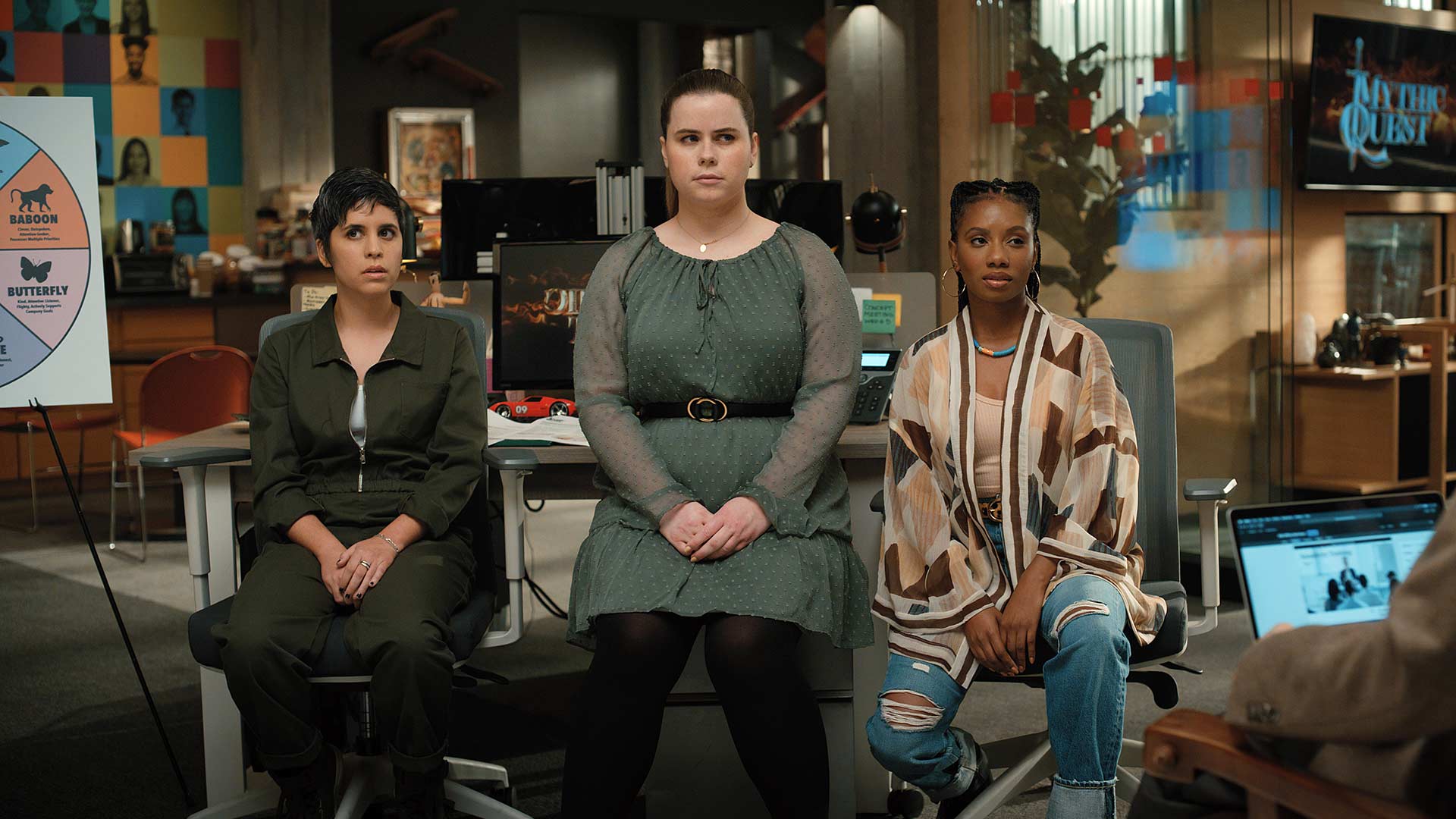 From left to right: Burch, Ennis and Hakim.

Through its humorous lens, the series presents all of these themes in a way that is accessible to video game newcomers while also never feeling preachy. That said, it should be noted that the show’s nature as both a comedy and Ubisoft co-production means that the series will never fully explore just how toxic the video game industry can get. Similarly, though no fault of McElhenney and his crew, Mythic Quest‘s connection to Ubisoft does make some of the storylines feel tainted, given the company’s own reckoning with widespread allegations of a toxic work culture. Nonetheless, it’s admirable that the series unpacks these oft-overlooked issues which, hopefully, will get more people to become at least somewhat aware of how the sausage is made.

“Ultimately, Mythic Quest, like Ted Lasso, shows how we can all be our absolute best when we come together.”

But above all else, Mythic Quest succeeds because of its two main characters, Ian and Poppy. Many comedies would likely be content to mine the pair’s relationship for cheap jokes and, god forbid, a contrived romance. Mythic Quest, however, understands that there’s more to people than that; we are, by our very nature, deeply flawed. There are incredible amounts of nuance to each of Mythic Quest‘s leads beyond the surface, and McElhenney and Nicdao convey that expertly. Poppy can simultaneously be a character who’s sympathetic due to her battles with deep-rooted sexism, and someone who’s an example of the “girl boss” culture being taken to its own damaging extremes. Likewise, the toxic masculinity exhibited by the ever-conceited Ian doesn’t mean that there isn’t genuine longing and empathy hidden underneath. 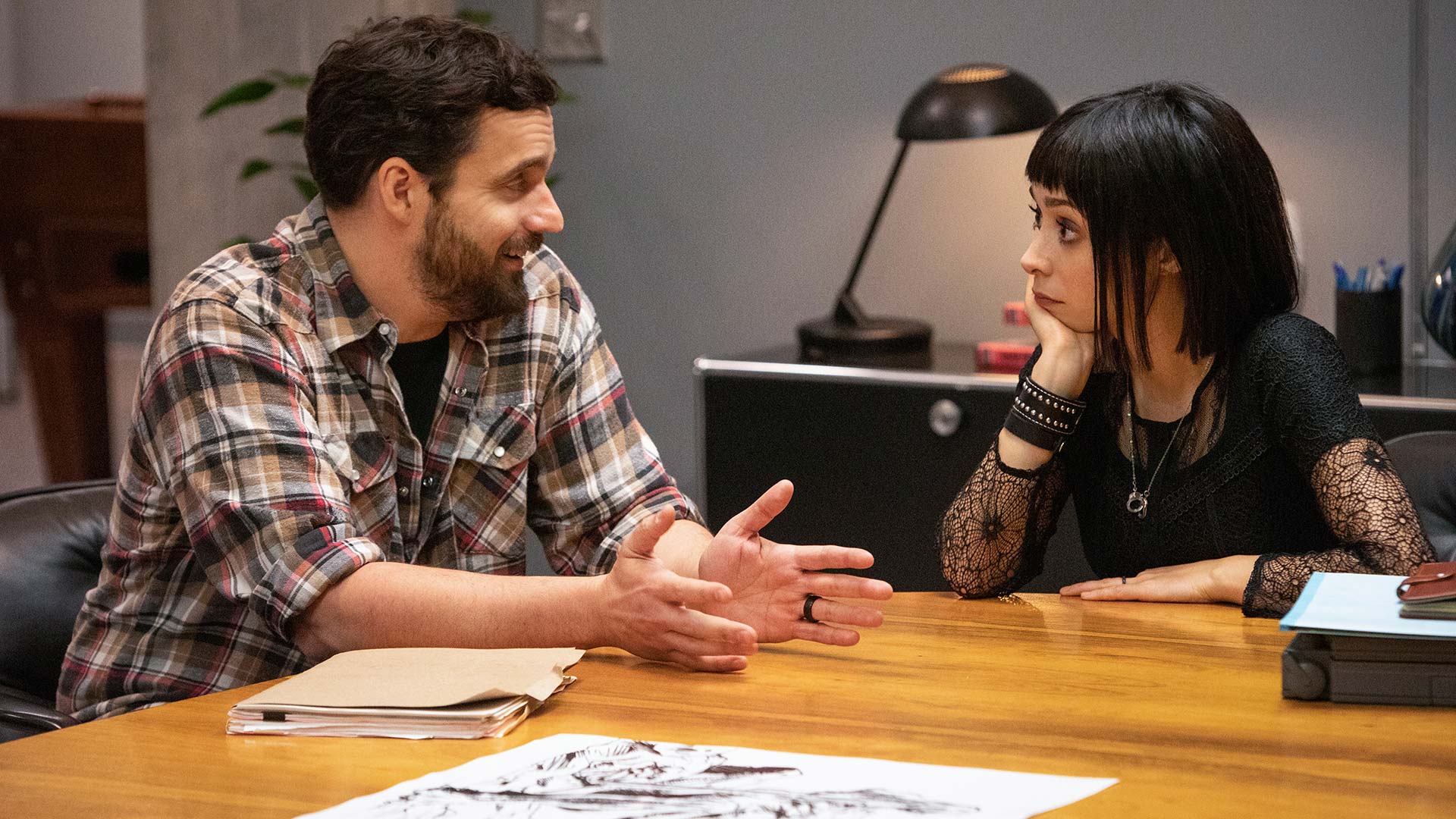 Jake Johnson and Cristin Milioti in “A Dark Quiet Death.”

And beyond all of these flaws lies two very talented people who genuinely work great together. They’re kindred spirits, in a way, and seeing them struggle to come to a sense of mutual understanding, respect and even platonic love for one another is easily the highlight of the show. If that wasn’t enough, the creative team uses two flashback episodes — one in Season 1, and the other in Season 2 — to examine different relationships that have connections both direct and thematic to Ian and Poppy.

In the show’s freshman season, this comes in the form of the romantic and developer pairing of “Doc” (Jake Johnson) and “Bean” (Cristin Milioti). It’s a heartbreaking meditation on love, passion and the sacrifices that we make when reconciling the two. Season 2’s flashback, meanwhile, explores the backstory of C.W. (F. Murray Abraham), a pig-headed curmudgeon of a supporting character in the first season. Through this flashback episode and a present-day follow-up episode, we come to learn what’s made C.W. such a bitter old man, and the way in which he ultimately grapples with decades-long regret and resentment is genuinely moving. Cleverer still, the stories of Doc, Bean and C.W. both flesh out the backstory of the Mythic Quest while finding emotional and illuminating ways to tie them into the show’s larger thematic statements about Ian and Poppy. 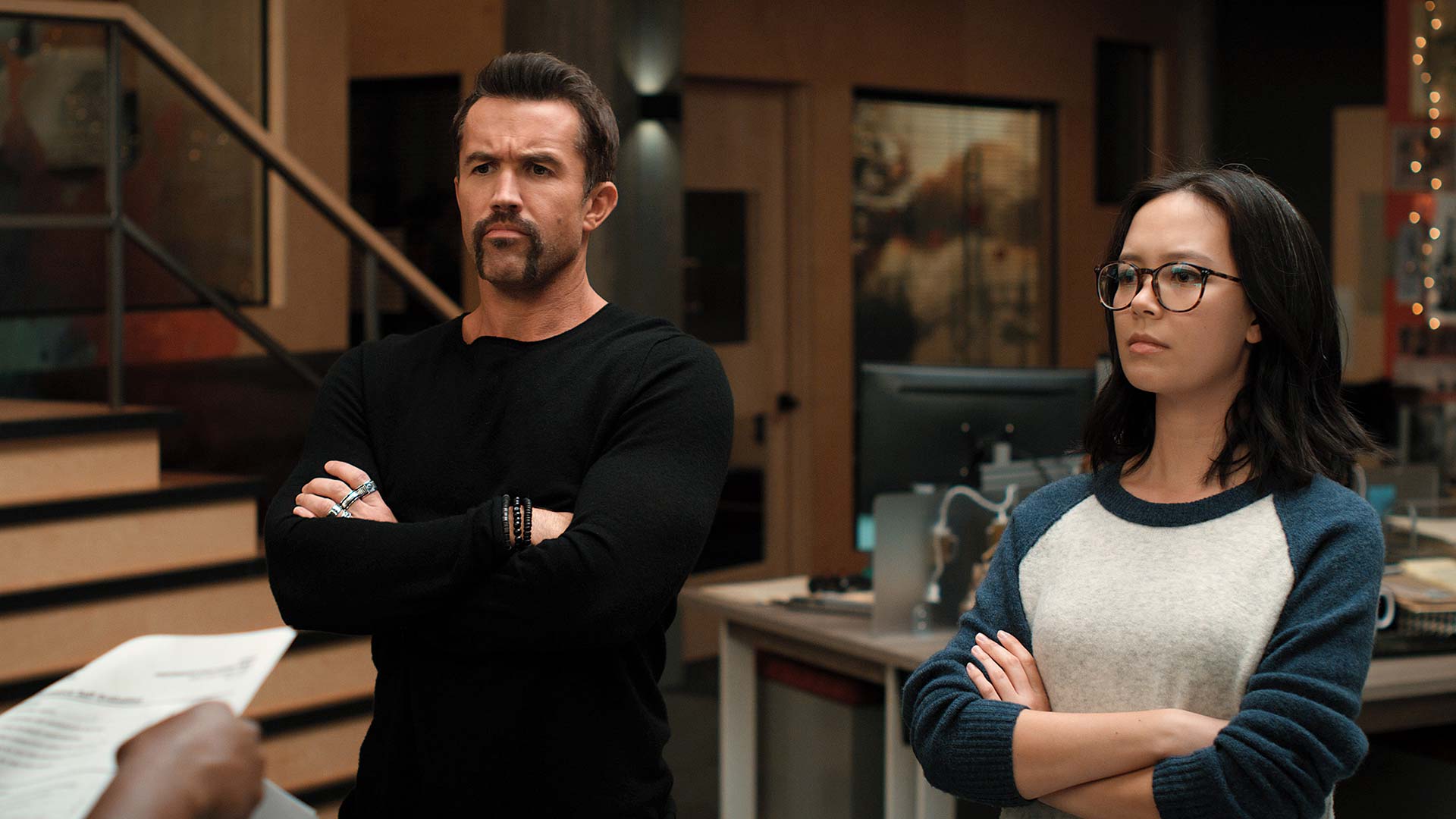 Ultimately, Mythic Quest, like Ted Lasso, shows how we can all be our absolute best when we come together. It’s a series that would be worth watching just for the funny video game jokes, but is so much better than that because of what it says about us.

What we do when we’re passionate, and who we can hurt when we pursue that passion. How we can achieve so much when we actually put aside our differences, be honest and show vulnerability to one another. Ted Lasso is deservedly praised for its feel-good exploration of the human condition, but it’s high time that we all extend that recognition to Mythic Quest.

Some companion entertainment: I also recommend Questie Besties, a podcast hosted by the charming ensemble of Charlotte Nicdao, Ashly Burch, Imani Hakim, Jessie Ennis and David Hornsby. The series offers a great behind-the-scenes look at Mythic Quest alongside some really fascinating anecdotes from the cast members and their guests.