Update 12/17/2021 3:08pm ET: Toyota Canada has clarified that the subscription fee model is only applicable for U.S. customers, and Canadian Toyota vehicle owners would not have to pay extra for a feature they previously had included.

Starting your car’s engine remotely is a beneficial feature, especially for those who live in countries with harsh winters; however, it appears as though Toyota car users will have to pay a price for the convenience.

According to a report from The Drive, 2018 or later-released Toyota vehicle owners will need to sign up for a subscription to use their key fob as a remote car starter after their trial period ends. When purchasing a new Toyota vehicle, buyers will have an option to try out Toyota’s Connected Services, which includes features like hotspot connectivity, emergency assistance and remote functionality.

After the trial period ends, Toyota users will need to pay a subscription cost to continue using the Connected Services. Also worth noting is that the length of the trial period you get depends on the audio package that’s included with the vehicle.

The news that Toyota will disable the remote functionality for users once the trial period ends, and charge customers for it first came out on Reddit via Toyota’s Remote Connect flyer. It details how some cars, that come with Toyota’s Audio Plus package will have the functionality available for up to three years before the customer has to start paying for the service.

Similarly, cars that come with Toyota’s Premium Audio package will have the key fob functionality enabled for up to 10 years, after which, the customer will have to pay a subscription fee to keep using the service. 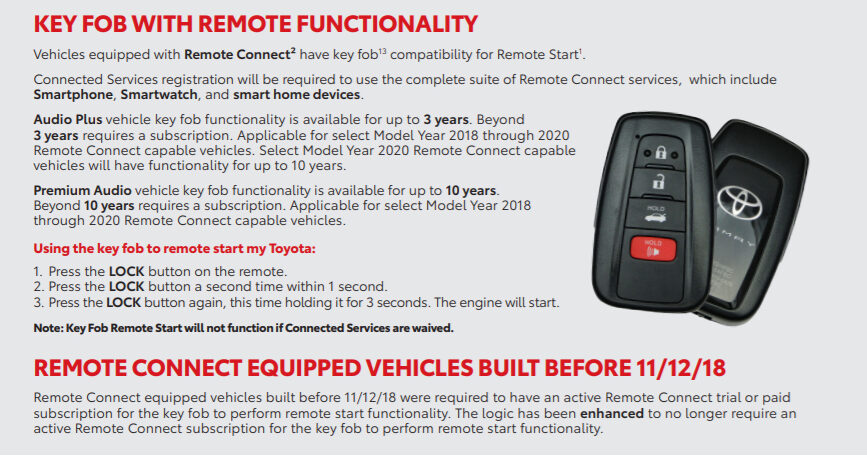 After the trial period ends, which doesn’t really seem like a trial period considering it can run almost 10 years, drivers would have to pay $8/month or $80/year to continue using the key fob services.