Hyundai Ioniq 5 hands-on: The devil is in the details

The first wave of desirable EVs is on its way, and Hyundai is coming out swinging

The world of cars is changing.

You can smell the electricity in the air as every automaker starts churning out what they think will be the first mainstream electric vehicle (EV) that’s not a Tesla. After driving the Ioniq 5, I feel confident in saying Hyundai might be one of the first legacy automakers to accomplish this goal.

The South Korean company seems to realize something that many other car manufacturers haven’t picked up on. Electrification is a great excuse to refresh your brand, push harder and maybe move up a few pegs in the eyes of the consumers. That said, I’m not entirely sure Hyundai is fully using electrification as the backbone of this strategy. Still, the automaker has been turning heads all year with its North American-designed truck, the Santa Cruz, and now with the Ioniq 5.

Both vehicles represent the company making a conscious and notable effort into new markets. Hyundai isn’t testing the waters this year — the company is all in, and you can feel that in its vehicles.

What makes the Ioniq 5 so special? 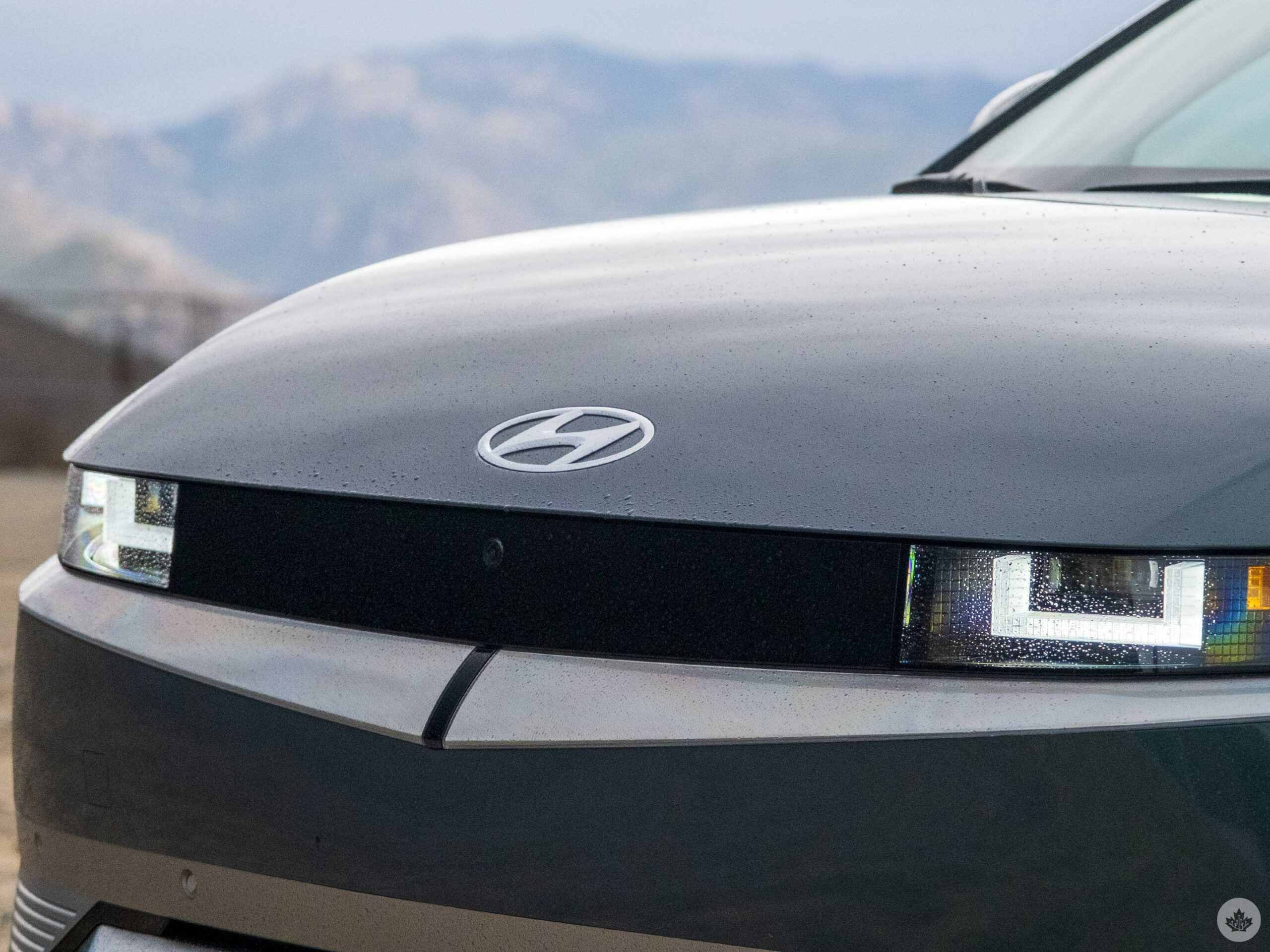 Three main components make this EV a cut above the rest: design, charging, and range.

The Ioniq 5 can charge using the same 350kW speeds that the quarter of a million-dollar Porsche Taycan does, and it has a range that can push between 354km to 488km depending on the trim (car upgrade package) you select.  Still, even the 350km range base model isn’t a terrible option since this distance is still a lot more than most people travel in a day. All this is to say that if you have range anxiety and don’t want or can’t afford a Tesla, the Ioniq 5 is an appealing option. However, I will mention that CCS fast chargers are still not prevalent in Canada. More are coming, but it’s always worth checking out to see if there are chargers at locations you frequently travel long distances to reach.

The design of the Ioniq 5 is a whole other story, and I’m not only talking about just the unique exterior. After going hands-on with the vehicle, I could immediately tell that Hyundai put a lot of work into making sure that every little piece of the EV matters and nothing feels slapped in without intention. For example, the square look of the stunning Pixel headlights and taillights becomes a pretty significant design element when you look throughout the car.

The interior features square accents inside of the doors and on the upholstery. Even the speaker grill behind the central infotainment display uses small squares as holes to allow sound passthrough. These are small touches, but taken as a whole, they make the Ioniq 5 feel like a car you as a driver should care about, since the designers obviously did. 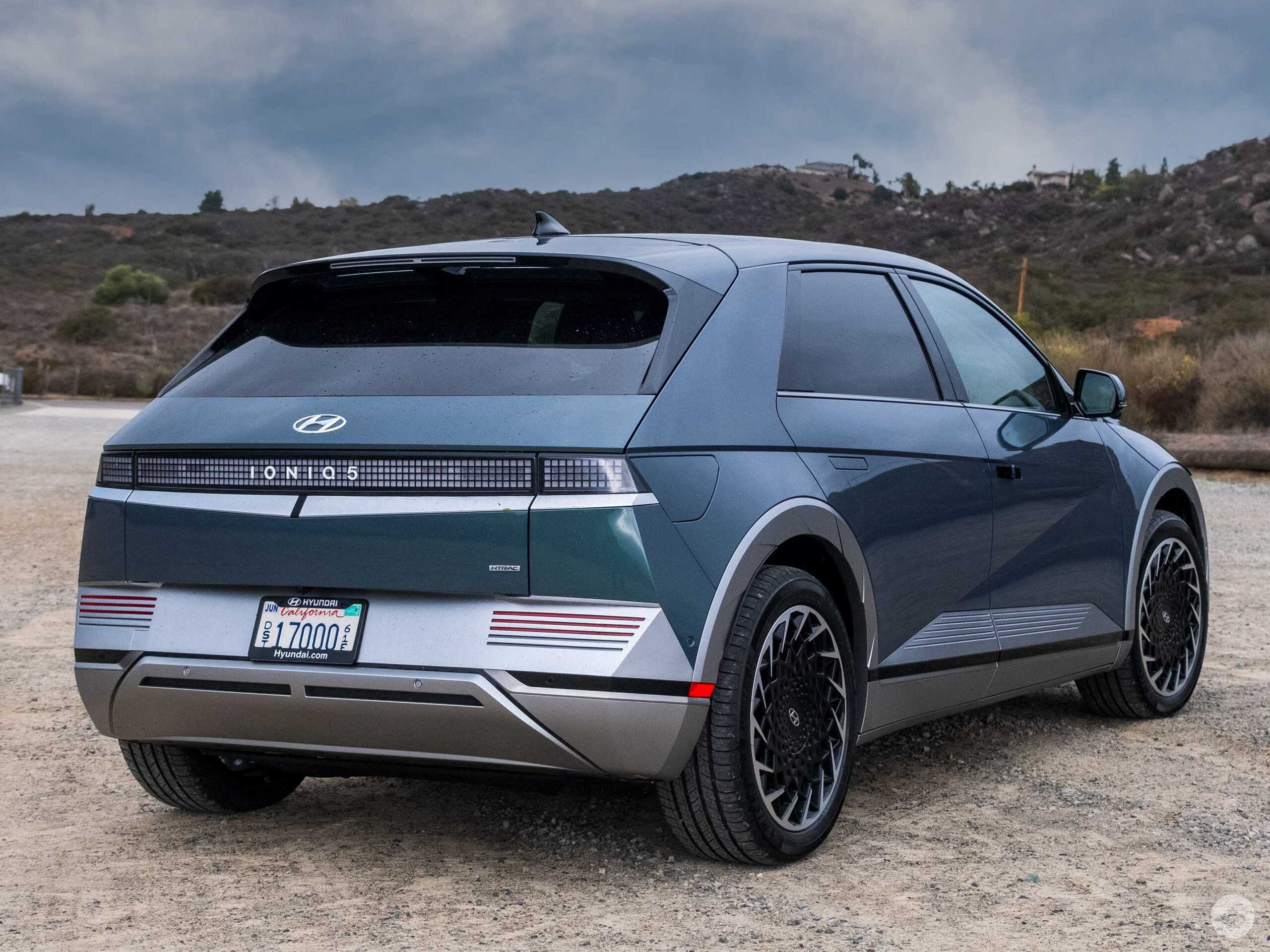 Beyond just looking nice, the inside is also laid out to be as spacious as possible. It’s strange to sit in a small hatchback that offers nearly as much room as a cube van. The floor is also very flat, so there aren’t many curves and slopes to take up space. I’m roughly six feet tall, and I had pretty ample foot and headroom in every seat, which I’ll mention are very comfortable. While I often forget to think of the passenger when I test vehicles, I think the Ioniq 5 is one of the best cars to be driven around in.

Beyond the fact that it’s an EV, this spacious interior is what feels the most futuristic and it’s what I’ll miss the most the next time I pack myself into my tiny Jetta. 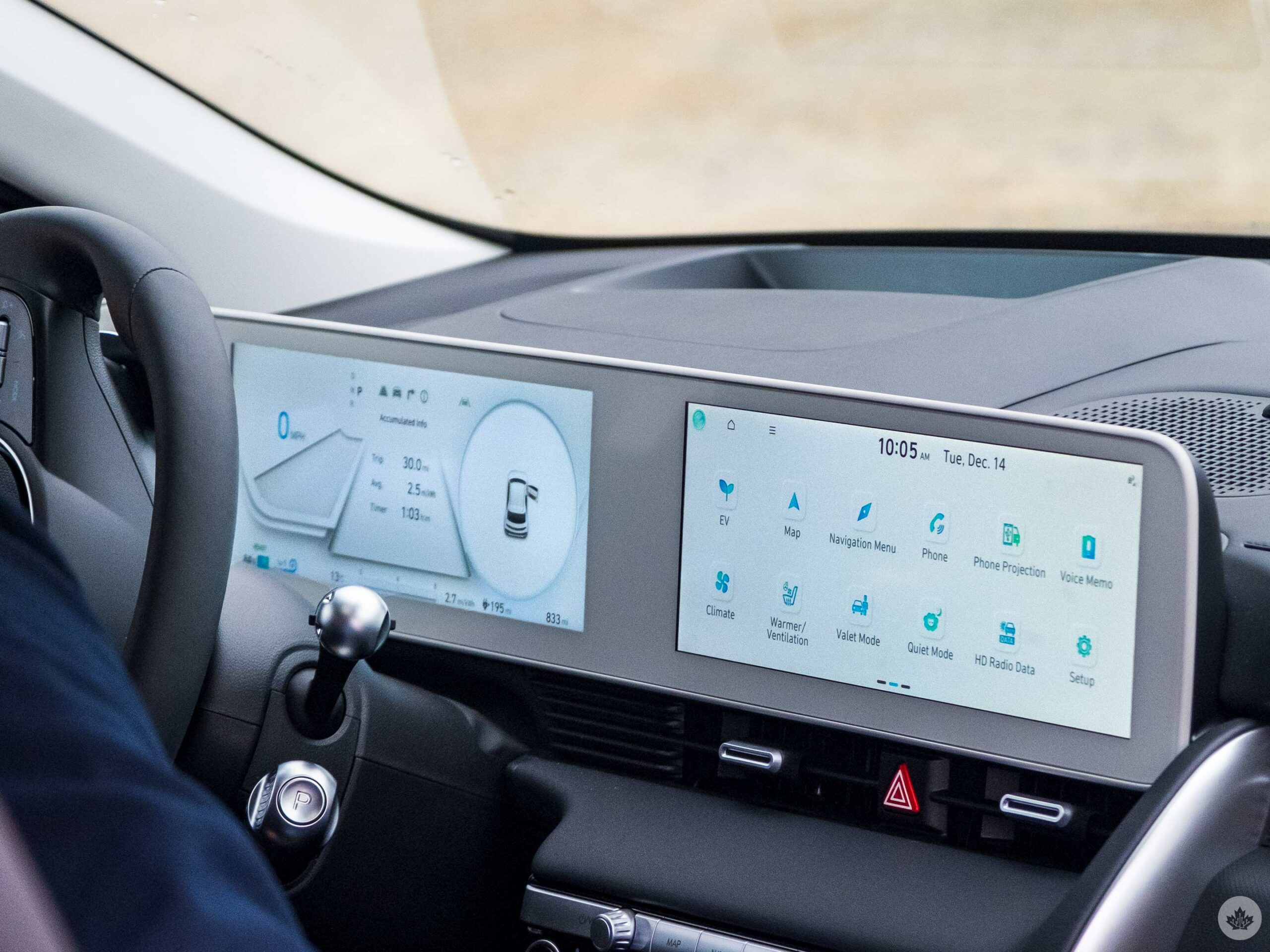 I really liked the infotainment system feature in the Ioniq 5, but I still found it leaning more towards a legacy setup than something more modern. It’s taking steps in the right direction but still has yet to surpass CarPlay in my eyes.

Most screens appear quite modern, and there’s no doubt that Hyundai’s team slapped a beautiful coat of paint on it, but once you delve into the apps, some reveal themselves to be a bit old school. I do like the fact that the main screen is laid out like a smartphone with pages of apps, but I often found myself tapping on each app with more force than I would need to apply on my phone, which was a bit annoying and lead to multiple taps.

I’m also fairly split on the unified icon design. All apps feature white icons with a blue/green gradient, giving colour to the symbol placed on each app. I like how unified this looks, but all the apps look similar at first glance. After you use it more and develop some muscle memory, I’m sure this would become less of an issue. However, I’d like to be able to spot some of the apps faster since less time spent looking at the infotainment means more time looking at the road. 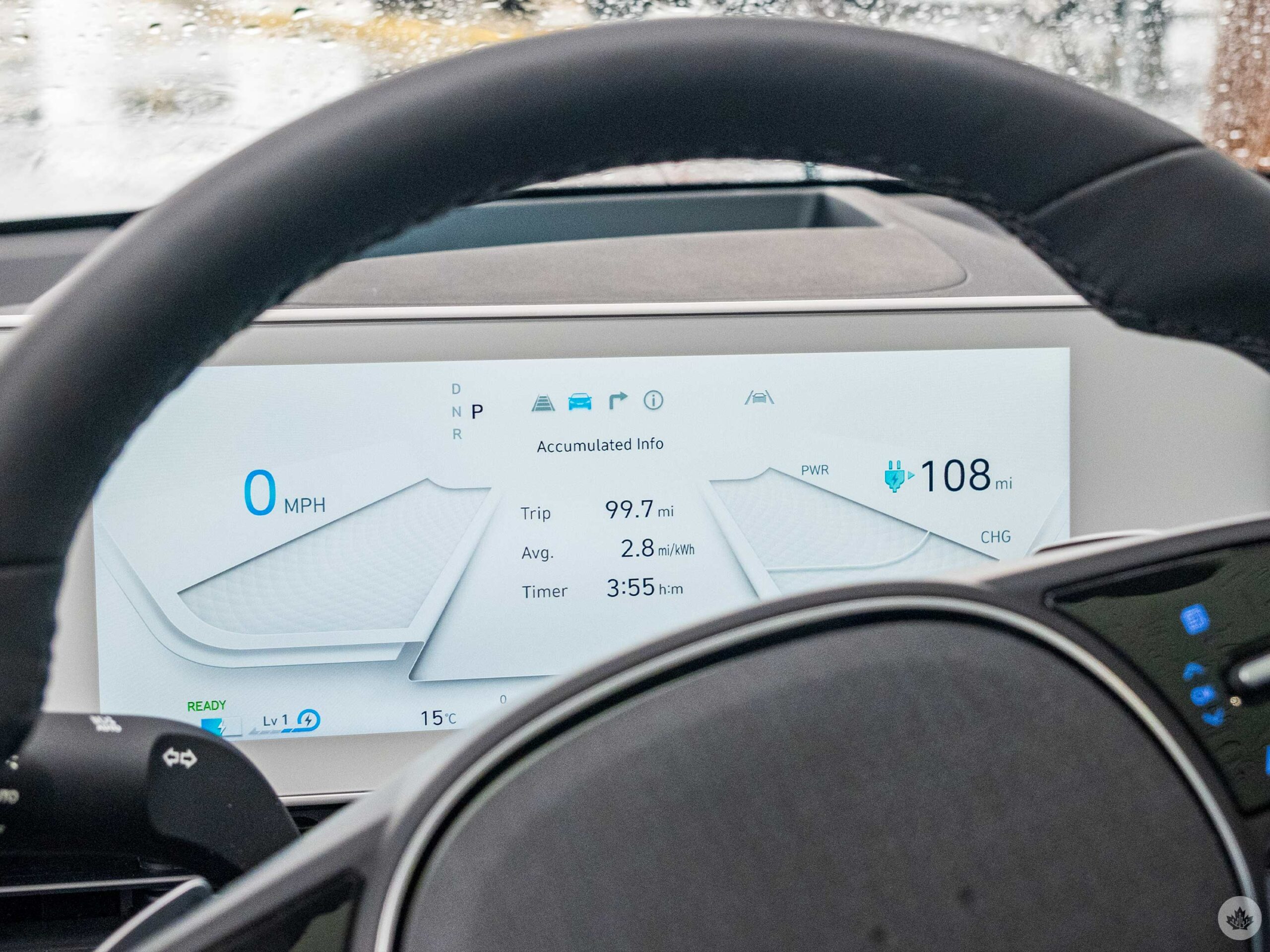 I’m not overly bothered by this since whenever I’m not testing cars, I use CarPlay or Android Auto and the Ioniq 5 supports both platforms.

I also think it’s still a fairly large step up over most competitors, and I’m interested in seeing where Hyundai takes it from here. After seeing how much love the company puts into its hardware design, it would be great to see the infotainment system step its game up with a few more refinements.

I also like how Hyundai kept traditional buttons and dials for climate controls. I’m fond of how minimal cars look when there is just a single screen dominating the dash, but since I’ve yet to use a vehicle with great software climate and volume controls, I was happy to see regular buttons and dials in the Ioniq 5.

Another thing I enjoyed is the Home Screen that displayed the time, weather, directions, range and battery charge. This screen was awesome and reminded me of the peaceful design OnePlus used to use with Zen Mode. As a CarPlay/Android Auto person, I guess I’d forgo using this, but for people who don’t, it’s a nice touch and looks great.

What stood out to me? 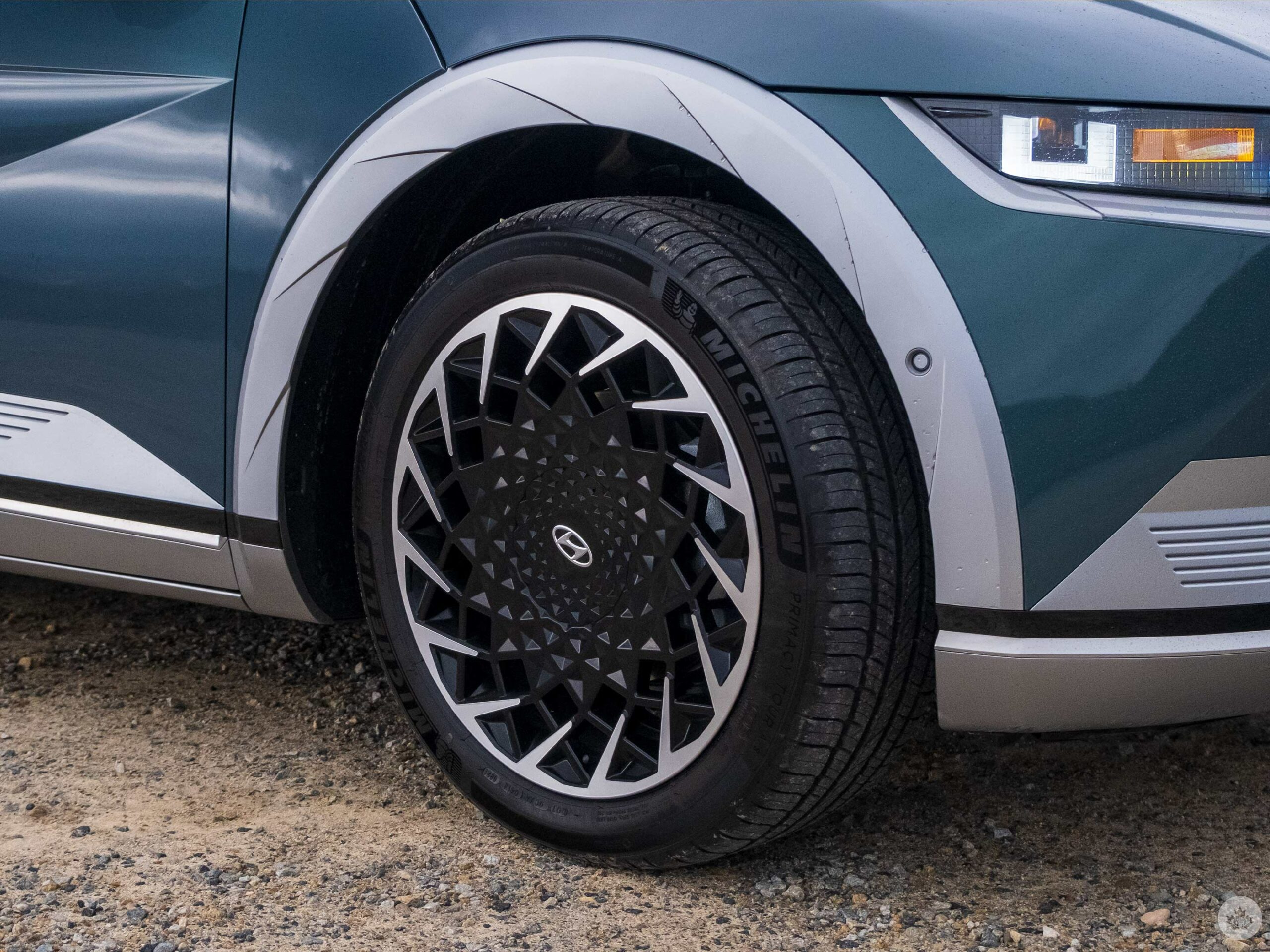 It’s super quiet inside the Ioniq 5. Hyundai has designed the car to block out a lot of outside noise and even the rims are designed to be silent. During my time with the EV, it stormed like crazy and rained a ton, but inside the car, it felt very peaceful.

Of course, I can’t not mention the ultra-flat floors one last time since they help make the car feel incredibly large inside. 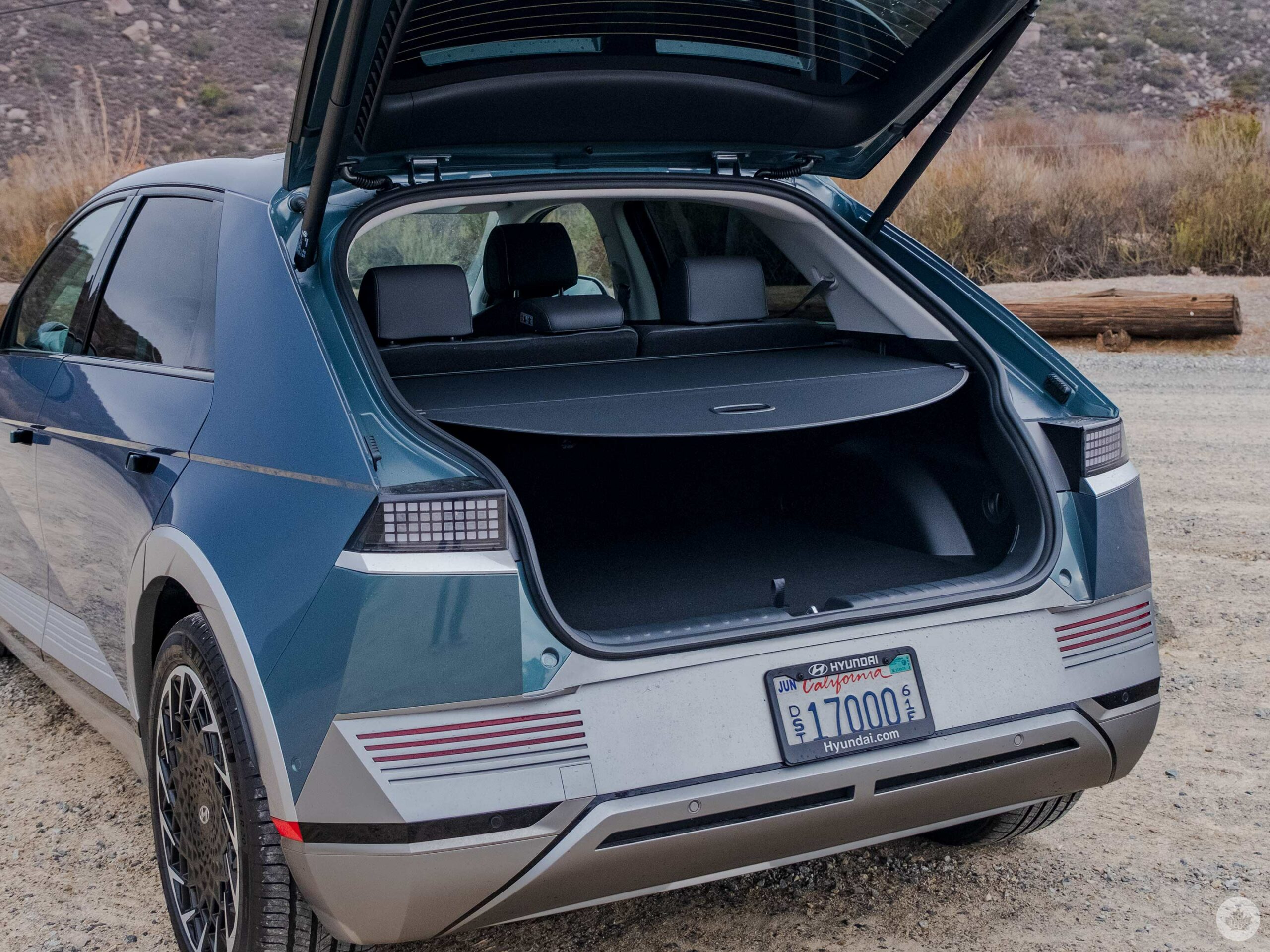 Unless you buy the highest-end trim in Canada, you’ll need to pay around $300 for an adapter that connects into the exterior charging port so you can access a standard 120-volt home socket. This accessory should be included with all trim options.

Inside, Hyundai has loaded the vehicle with a bunch of spa and relaxing sound effects. It’s a minor feature, but still kind of cool if you want to drive around with ambient background music.

Behind the wheel, there are two paddles that look like shifters on a gas-powered car. In the Ioniq 5, these paddles reduce or increase the vehicle’s regenerative breaking capacity. There are four levels, with the final level dropping the car into one-pedal mode. Most of the time, I drove in either level two or three to still use the brake pedal normally. 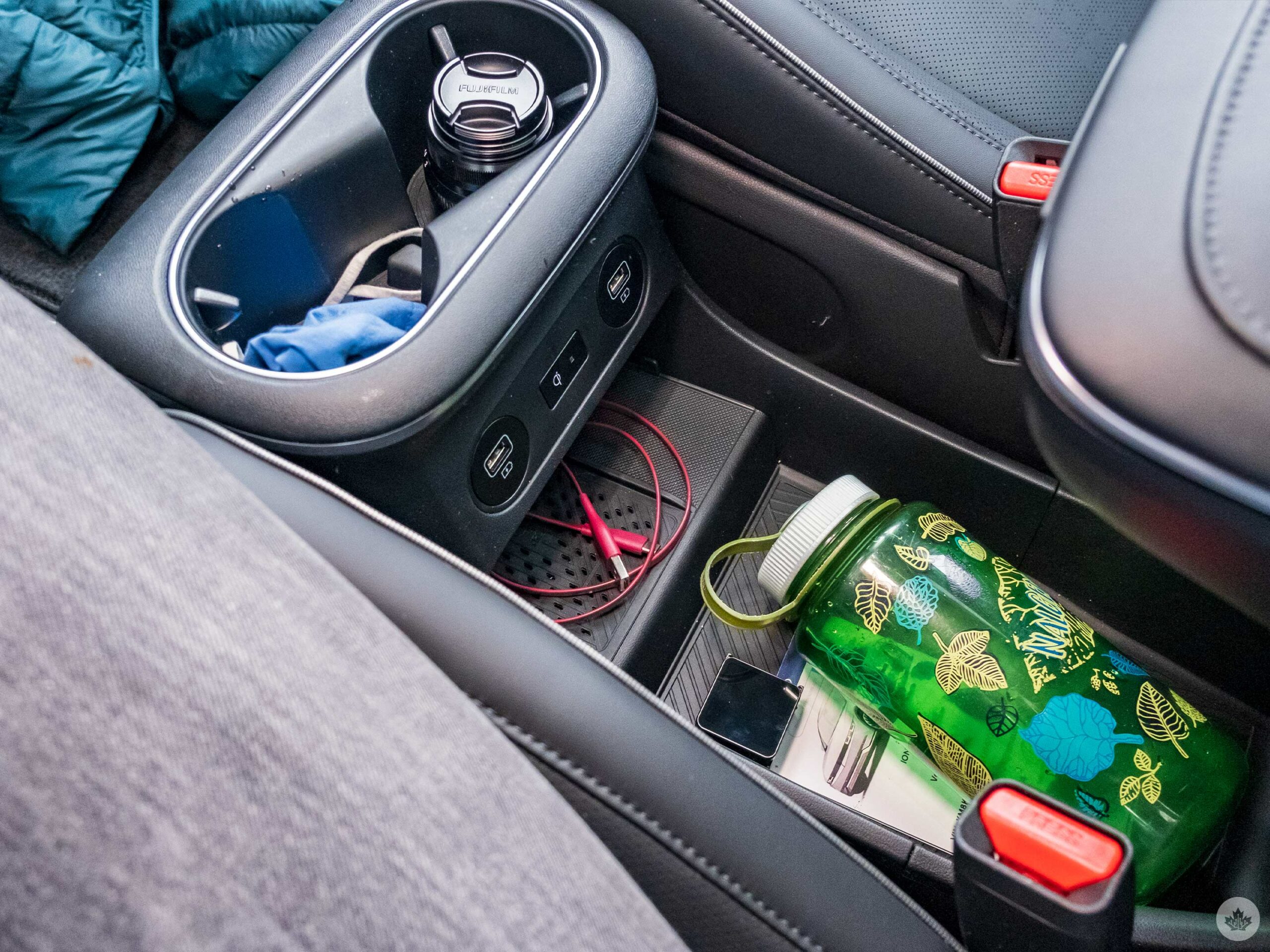 In the trim I was driving, there were lots of small details like sunshades on the rear windows, and the trunk had convenient cutouts for holding up the false bottom so you can open it with one hand.

Because there is so much interior space, Hyundai needed to push the wheelbase outwards, resulting in a fairly wide turning radius. It’s not bad by any means, just something to be aware of.

I’ll mention that I really liked the grey and white colour options. The grey trim blended in with those models a bit more than on the green-ish/blue-ish model I drove, and I think that gives the car a more complete look.

The first EV for everyone 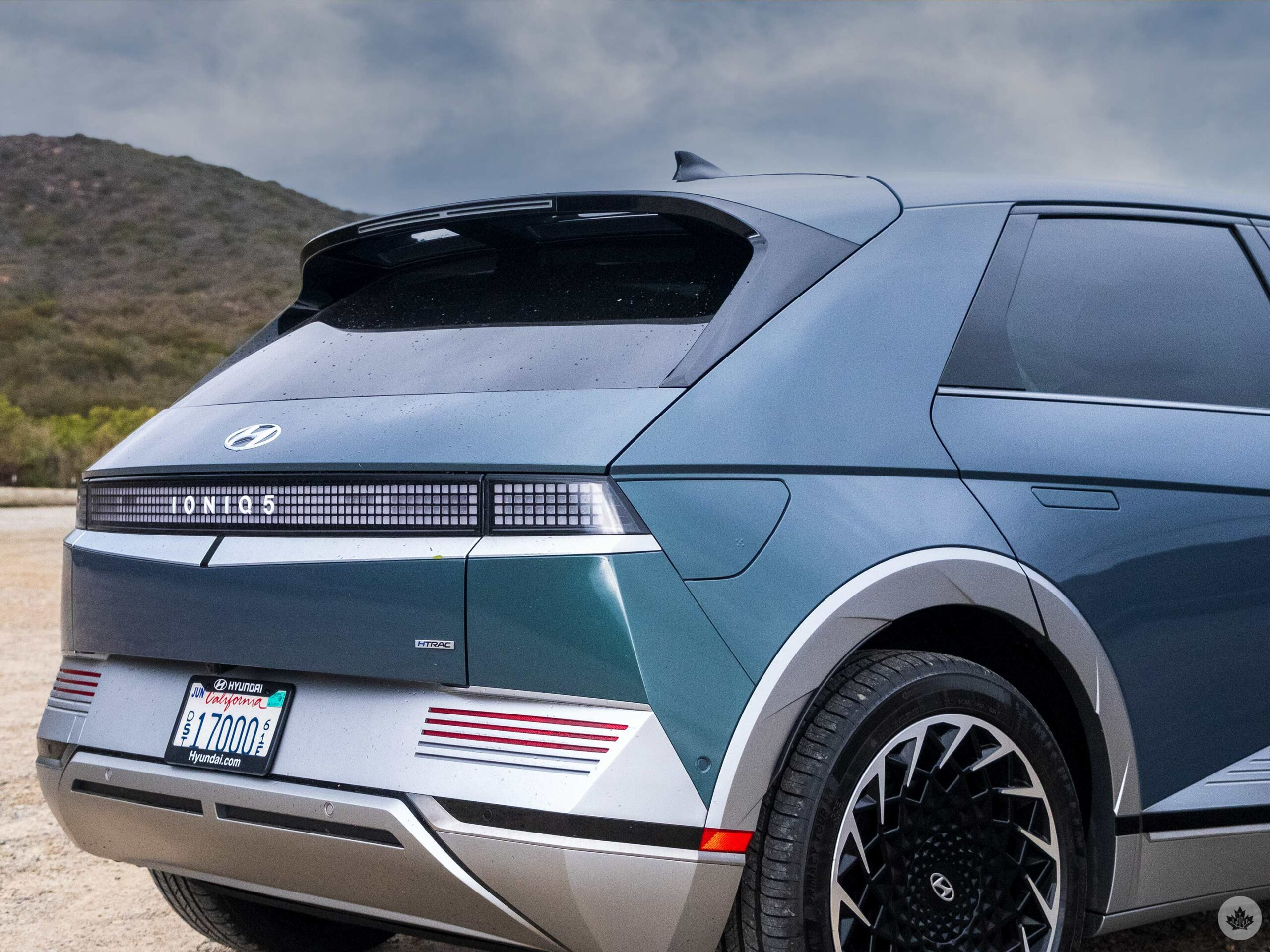 After spending a day with the Ioniq 5, my excitement for the EV has really grown. I think that if Hyundai markets it right and doesn’t face any recalls like GM, it has a sure hit on its hands. Inside and out, the Ioniq 5 feels like a well-designed car, and I think consumers will really pick up on this.

Of course, range anxiety and the lack of chargers will probably scare some people away, but if you need to buy a new car in 2022 or 2023, moving electric, and specifically to the Ioniq 5, would likely be a solid choice for most. It’s also worth noting that the EV starts at a reasonable $45,000 in Canada.

Unfortunately for most Canadians, Hyundai has already sold out of its first batch of pre-orders, so you’ll have to wait a few months – or maybe even longer. We’ll have a more in-depth look at the Ioniq 5 on our site in the coming months.